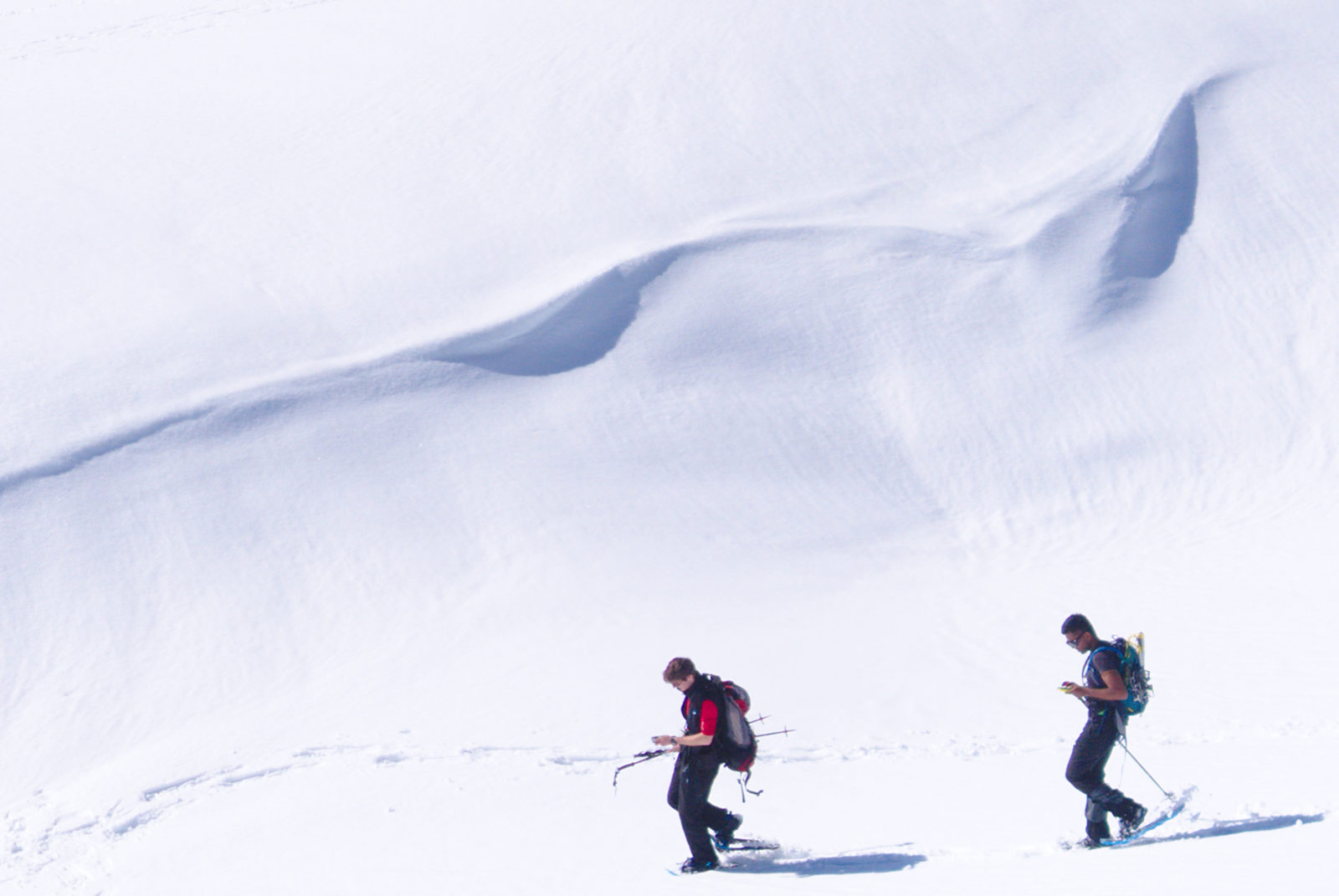 A glorious trip up above Peterskopfl and towards Pyramidenspitze! We’d hoped to do this route last weekend, but we decided against it due to the high avalanche risk. This weekend was a perfect chance to have a crack at it, with wonderful weather, low avalanche risk and good company.

We met Tanguy at Kufstein and wandered through the pretty town towards the start of the trail. It was a steep hike up in the hot sun, where I regretted my long sleeved top as we powered past huge numbers of hikers on the veritable Autobahn up to the various alpine huts. There was no snow at this point and we looked rather foolish with snow shoes strapped to our bags amongst all these people with very lightweight kits. Eventually we reached Ritzalm, where the snow began and the crowds thinned. I donned microspikes for the slippy but well trodden path in the snow, and we climbed steeply up to the snappily named Vorderkaiserfeldenhuette. Really rolls off the tongue.

Again the crowds thinned, and we put on our snowshoes, flipped up our heelbars and went straight up, ignoring Naunspitze for now and bypassing Peterskopfl above it – we had one goal, the Pyramidenspitze, and we’d return to these other minor peaks if we had time on our return. The plateau above Peterskopfl is gorgeous, wide and rolling with lots of gullies and deep snow. We made our own trail, finding different routes over the buried dwarf pine and massive dolines. There were abundant tracks and scat of mountain hares and deer.

We wandered up Einserkogel, and looked at the route ahead. There was a steep drop, then a steep ascent up Zwoelferkogel, then another steep descent on the other side. I began to get the Fear, but decided I’d go some way up Zwoelferkogel to see what the conditions were like. The snow was slushy and slipped easily, and I found it hard to make progress. Turning round and retreating was even more scary, with the slush making it very easy to slip and fall into the rather unpleasant run off below. We decided to turn round and leave Pyramidenspitze for another day.

The return route was really fun, and we paused to practice our avalanche rescue skills. I buried Tanguy’s emptied cheese bag with my transceiver and Tanguy and Jerome tracked it down, returning my slightly cheese smelling transceiver to me after only a short burial. We wandered around various minor peaks on the plateau, then dropped down for the scramble up to Naunspitze, which has stunning views over the valley. After that we went to the Hut with the Long Name and had some food and drink before rushing down the hill side to catch our train. What a lovely day!