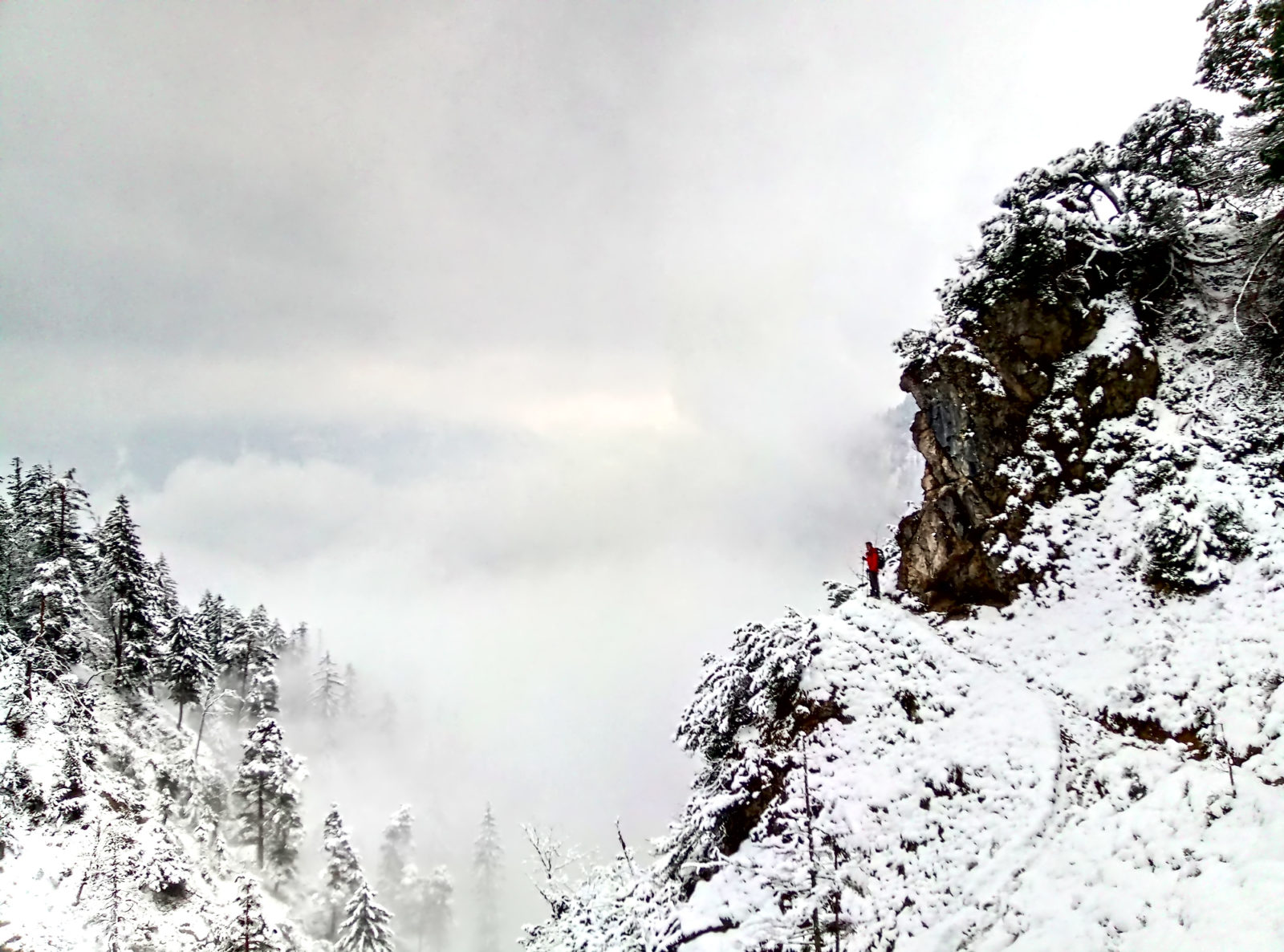 Link to rough route: we actually went up and down the same way, taking the more direct path.

What an incredible snow shoe tour! Jerome and I had originally planned to take the train to Griesen at climb Felderspitz, but at the last minute we realised the trains were terrible (we’d have to go through to Austria and then back to Griesen – no thanks!). So on Saturday on the train back from Wallberg, we hatched a new plan, the climb Kramerspitz. But not via the steep east slope from Garmisch, but via the longer and more winding path up from Untergrainau.

As we sat staring out of the window on the train, bleary eyed and not a little bit tired from our antics the previous day, we saw the rain turn to snow. This was just as the DAV forecast predicted, and exactly as we had planned. We arrived at Untergrainau wearing basically all of our layers, and set off at a fast pace across the river and then up into the hills.

The path climbs steeply at first through dense woodland, before flattening out slightly. Here we stripped of most of our clothing and headed along up the forest road. The snow started in patches on the side of the path, then covered the path, and before we knew it we were in the winter wonderland we so deeply craved!

Deep fresh powder all around, too loose to justify spikes and with too many roots for snowshoes. We powered on upwards, through the mist shrouded Gelbes Gwänd and gradually up to Stepberg Alm, tragically shut until mid-May. Here another hiker caught us – Jerome had a chat and he suggested we’d find it difficult to follow the path to Kramerspitz. We scoffed at the idea. He was right.

We put on our snowshoes and headed up the steep slope. The visibility was appalling – if you fell behind by ten metres or so you were entirely invisible to the person in front. But in the still, calm air your voice could travel for hundreds of metres, creating some very spooky situations, where you could hear but not see.

Gradually the slope became more pointed and resembled the ridge on the map. We stuck close to the ridge where we could, as at least we then knew where we were. Sometimes thick dwarf pine forced us down slope, and we would spot a trail marker, though no trail. Traversing along with a steep run off below was unappealing, and eventually we split from the path and decided just to follow the ridge up to Kramerspitz.

The ridge was tough going, and more challenging than anything Jerome or I had faced before. It was sheer cliff on the north (left) face, with the bottom nowhere to be seen. The wind blew the snow in huge waves of powder over to the right, and this south face was covered in thick dwarf pine. The ridge was barely wide enough to walk along in snow shoes, broken up by boulders and roots, and we picked our way ever so slowly along, trying to keep within sight of each other.

After edging around one particularly unhelpful boulder, we arrived at a summit. But where was the cross? We looked in vain. We took a selfie anyway, and then checked the GPS. Ah. Right.

We were stuck at a local maxima, a sheer pinnacle of rock separated by Kramerspitz by 200 m and 30 m of height. Close though it was, we could no more see it than the brooding spectre of the Zugspitze, which too was invisible across the valley in the thick mist. There was no way down except the way which we’d come, and we realised we would not make it to Kramerspitz today. Still, it’s unlikely many had visited our little peak before, so we named it Kramerspitzchen (-chen is a diminutive) and headed back down, happy to have made it along the ridge.

The return journey was fast, the deep snow allowing some excellent plunge stepping. We de-shoed at Stepberg Alm and made quick time down the mountain. The mist lifted at Gelbes Gwänd and Jerome got some excellent photos in the fading light. We made it to Untergrainau only to find we had to take a train almost to Austria before we could return to Munich – this was the exact fate we had tried to avoid by not going to Felderspitz, so it felt like that mountain had the last laugh.

This may be the last snow shoeing trip of the year for me, but it’s been an incredible few weeks with four excellent trips. Thanks as always to Jerome for his good humour, common sense and endless reserves of energy!