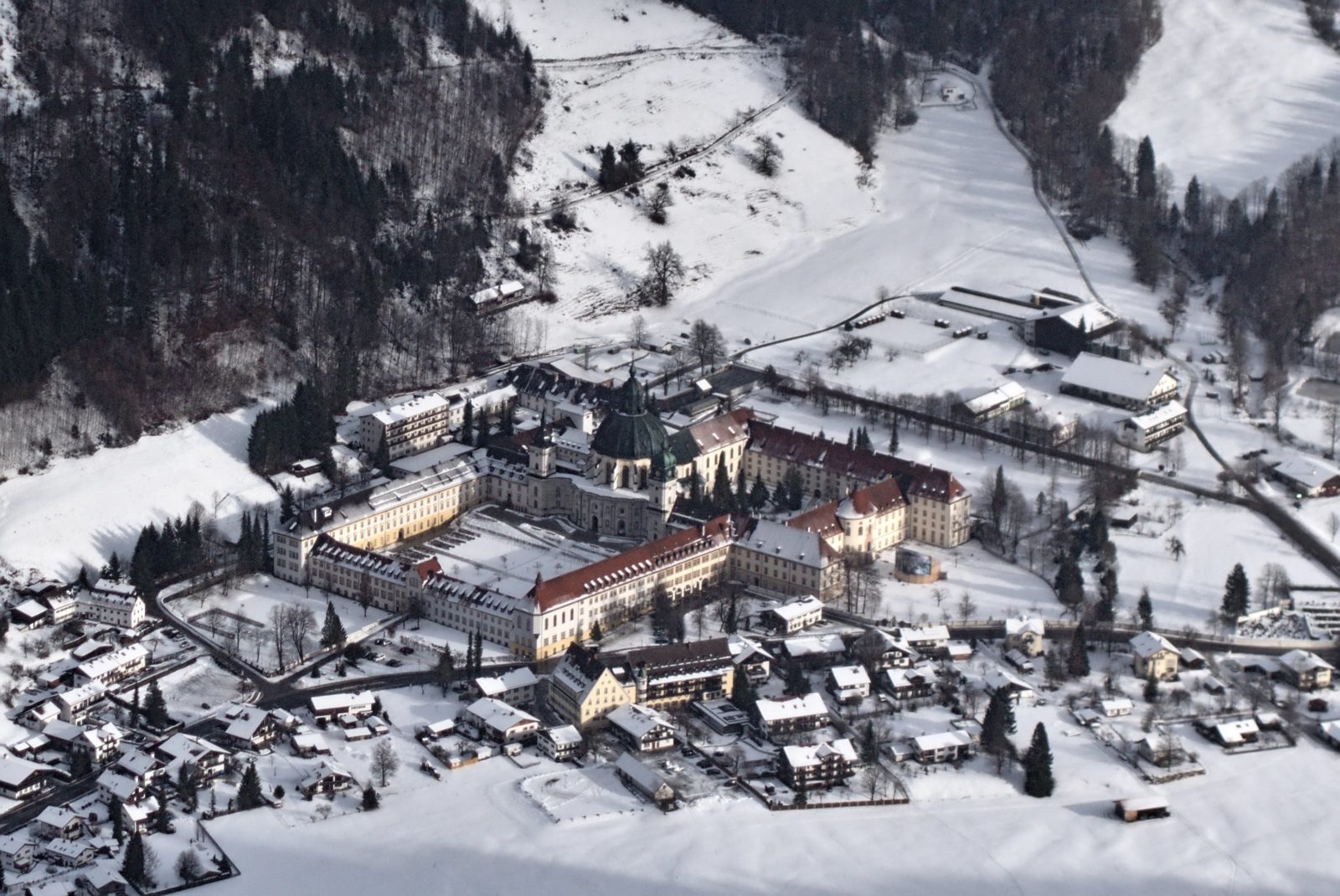 A windy, wintry, snowy hike to Notkarspitze. Originally planned for five people, two buddies dropped out before the hike, leaving us as myself, Alex and Johanna. We took the train to Oberau, and got advice from a group of youths returning from a night out in Munich. They assured us the weather would be great. They were not entirely correct.

At Oberau we took a bus to Ettal am Berg, and climbed the eastern ridge towards Ochsensitz. We put on microspikes for the forest road, but in the forest the snow was wet and clumped under our boots, so we removed them. By 1300 hm, we were wishing for snow shoes! There was occasional snow and gusts of wind, and sometimes the sun came out, giving us glorious views over Oberammergau and Ettal.

As we climbed higher, the snow became deeper and we sang carols to encourage the person breaking trail (often Johanna!) There aren’t too many carols shared between the UK and Germany, so we didn’t always know the words, but it was good fun anyway.

We paused only briefly at Ziegelspitz before pressing on to Notkarspitze. The path became indistinct, with deep snow and sometimes very strong winds. The last section up to the peak was a real slog, but eventually we made it. We weren’t going to hang around for long – the wind was strong and the visibility low. But as we walked only a few metres away from the summit, the sun came out, the wind dropped and all was warm and well.

We’d originally planned to tick off a few more peaks before heading to Farchant. However, it had taken us five hours to reach Notkarspitze, which was a 2.5 hr hike in summer. Knowing that dusk would soon be upon us, we opted to take the long valley back down parallel to the ridge we had just been on, and end in Oberau.

With only a few navigational issues, we made it to Ross alm (everything looks like a path in a snowy forest) where we paused for second lunch. The next section was along the side of the valley, with a steep drop off into the Giessenbach below. There was wet snow on the group, which had sometimes slid down in mini avalanches, and we picked our way across these debris fields, looking for the red paint marks on the trees for guidance. A few Gams watched us from high above, ready to trigger an avalanche and steal our boots.

Darkness fell just as we got to the train station in Oberau. The hike had been far longer than I expected, a total of 10.5 hrs. Snowshoes would have been very useful for many sections. The wind and snow were not really an issue by themselves, but we were all experienced and had plenty of layers and lots of food to keep us going. Winter is certainly here now, even the low “easy” hikes in the pre-Alps are now a serious challenge!