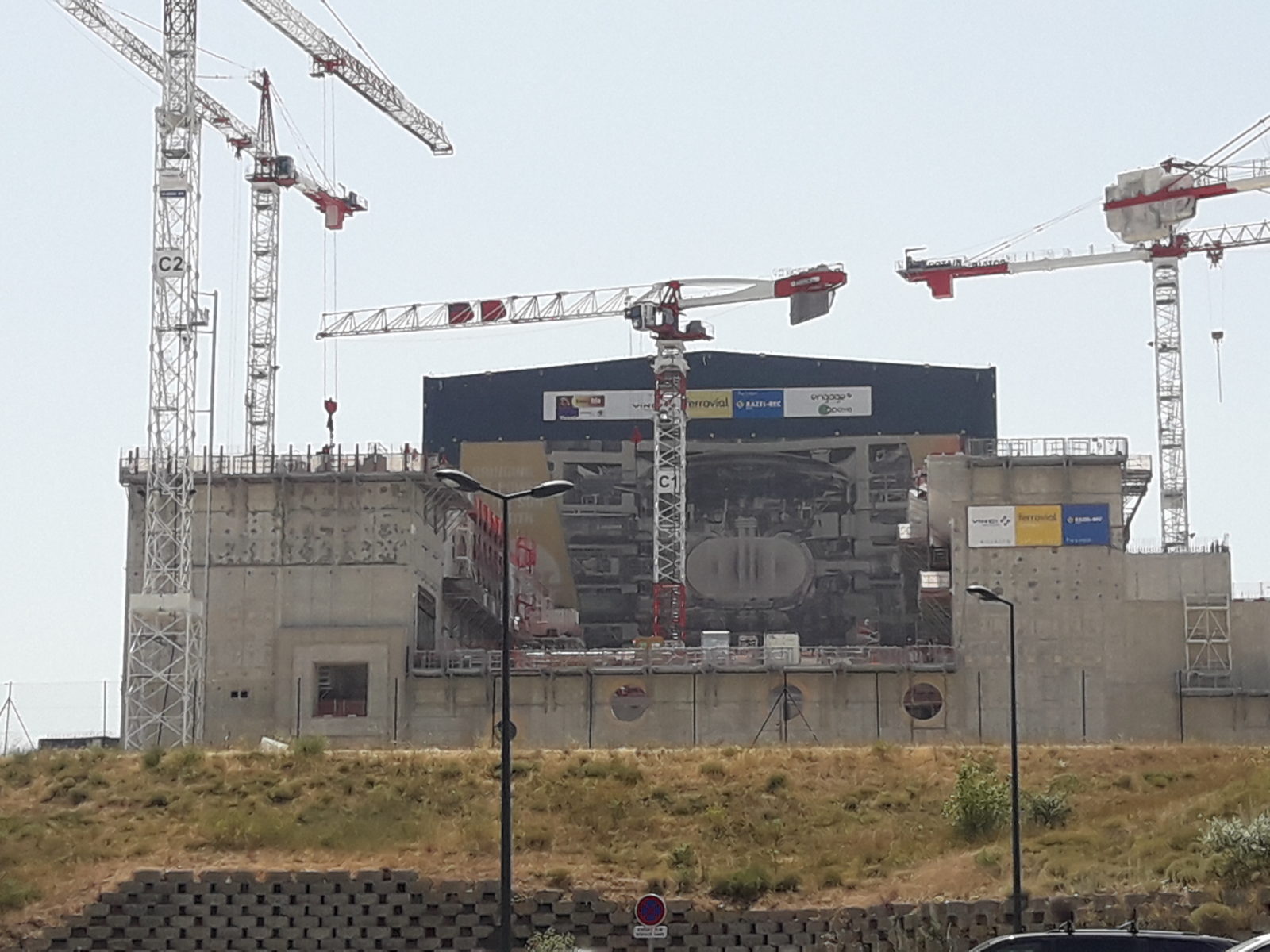 This was my first visit to the ITER site to meet with our collaborators, so I thought I’d record a few impressions whilst I wait for my plane at Marseilles airport.

We arrived on Monday night, and stayed in a hotel in Aix en Provence (pronounced Eggs, the “en Provence” is silent). The next day we sped north east along the motorway to Cadarache, the site of both the ITER project and the CEA, the nuclear research department of the French Government. Inside the ITER site we went to building 82, on the far side away from the construction site. It’s a prefabbed building made entirely from plastic, which is somewhat disconcerting, but we eventually found a meeting room with AC and started our meetings.

The level of complexity at ITER is quite mind-boggling, and a good example came from our first meeting. We have some bolometers we want to bolt onto the vacuum vessel (the big steel donut that keeps the air out). Another group want to lay magnetic flux loops on the inner surface of the vacuum vessel, so they can measure the location of the magnetic flux surfaces inside the ITER plasma. Our cameras will sit on top of their flux loops, so we need to provide a little cutout so that we don’t squish them. It’s obviously not a difficult problem to solve, but it does need to be agreed and written up so that we put the cut out in the right place. This was done quite quickly, but that’s just one of the interactions between components that needs to be solved, and not all of them are so easy!

Another meeting was on defining regions of the plasma, which turned into a more general discussion of where the plasma will emit light. It turns out that different simulations give different results. There was a robust discussion about which code is correct – frankly, this is above my pay grade. I want to get to the point where, if you tell me where the plasma emits, I can tell you how much light each bolometer camera will see. Eventually we agreed on a general strategy and left it to the two simulation teams to come to an agreement.

Lunchtime came, and we walked over to the cafeteria, past the building site. It’s a 15 minute walk, and it becomes clear that the ITER site is absolutely huge. Even when the I finally saw the tokamak building, it took another ten minutes of walking to get near it, and it loomed over everything around.

The tokamak building from the only thing on the ITER site – there’s a croygenic plant, buildings for the microwave generators, buildings for diagnostics, a vast switch yard to take energy from the French national grid and all the general infrastructure needed to support over 1,000 people currently working on the project.

The cafeteria at ITER is pretty nice, with a range of cuisine to reflect the international nature of the project, and decent air conditioning. After a coffee we returned for more meetings, sorting out conflicts and clashes with other parts of the project, and discussing how to verify our designs to ensure we meet the requirements set by ITER. At the last meeting we met with some more people providing simulation data for our analysis and talked about how to access the data through the centralised ITER database of simulations (and one day, experimental data!)

After that, it was time to blow off some steam by climbing at the local crag in Meyrargues, a pretty limestone cliff in a small canyon. I borrowed some climbing shoes from Hans and along with a colleague from ITER we knocked off a few climbs before heading back to the hotel.

Day two passed quickly – I had less to contribute to these meetings as they were focused on the nitty gritty of the CAD models and I am not a designer. In the evening I walked for an hour round Aix before I overheated – the temperature outside was 40 C and the cathedral was the most attractive building in town as it remained cool and dark. Aix is a very pretty, very expensive little city and it seems like most people who work at ITER live somewhere nearby.

This morning I went to CEA with Didier, a collaborator who is writing a code (ToFu: Tomography for Fusion) to accurately modelling the light seen by bolometers and other types of line integrated diagnostics. The security at CEA was much higher, with soldiers with guns and lots of barbed wire fences. Behind the gates is an nuclear reactor from a submarine, a plant for creating liquid fuels from algae, and the WEST tokamak. Sadly I wasn’t allowed to take photos, but WEST is pretty neat – it’s a “medium sized tokamak”, which means it’s big enough to stand up inside, and it’s also got superconducting magnets, so it can maintain a plasma pulse for much longer than standard tokamaks like JET or ASDEX-U.

After a quick tour we got down to the nitty gritty of what I needed from ToFu, and what Didier was working on. We quickly identified some minor bugs, and fixed them – it’s great to be able to work directly with some maintaining the code you use! After a few hours we grabbed lunch, and as we took the bus across the vast CEA site to the cantine, Dider explained there is a herd of wild boar and a flock of wild mouflons (very horny sheep) inside the CEA perimeter – they were there when the fence was built and they’ve been there every since!

It’s remarkable how much one can get done meeting face to face. I flew here, and I should’ve tried harder to avoid that, as the journey is possible by train from Munich. I’ll see what I can do next time – for now I’ve got a notebook full of action points, plans and questions to answer, so that should keep me busy for a while.

Any comments contained with this blog are entirely those of the author, and do not necessarily reflect the opinions of the ITER organisation, Fusion for Energy, the Institute of Plasma Physics, or any other organisation or entities, living or dead.