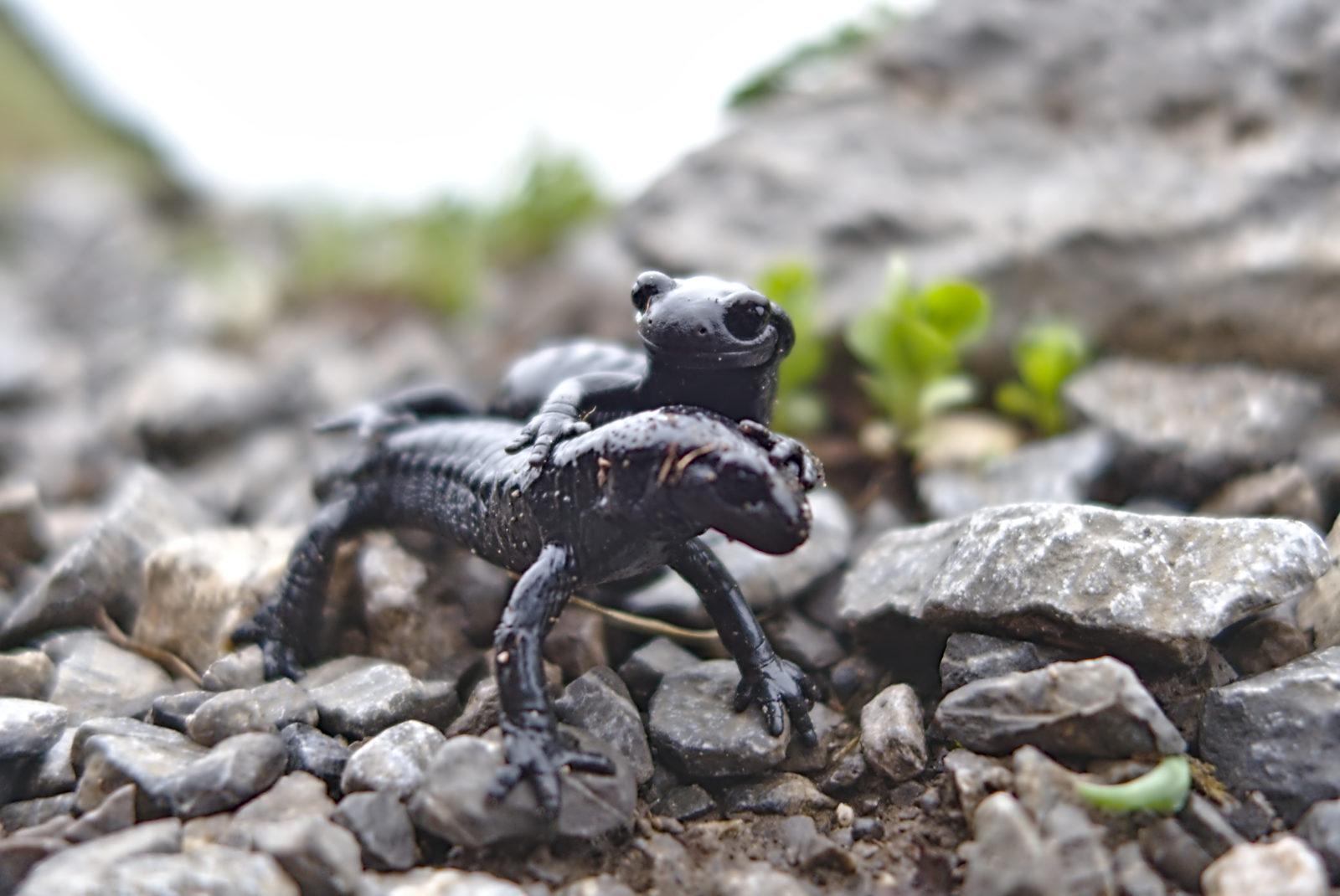 Three days of hiking and Klettersteig (Via Ferrata) in the Karwendel mountains with Jerome and Johanna. Although not all of this trip went to plan, it was a great experience and I’ll be back on to the Klettersteig as soon as possible!

We’d originally planned to start in Innsbruck, take the Innsbrucker Klettersteig to Pfeishütte, then onto the Bettelwurfhütte via the Absamer Klettersteig, then north to Lamsenjochhütte where we’d do the Brudertunnel Klettersteig. Thanks to the heavy snow this winter, the Pfeishütte cancelled our booking as they couldn’t open in time, and the route to Lamsenjochhütte was closed. Only a few days before the trip started we managed to salvage a new plan from our remaining hut bookings, and so it was that at 0430 I rolled out of bed and stumbled over to the train station.

After several hours of trains and buses, we made it to Eichatt Bettelwurfsiedlung at 0830, and began to walk up the forest road to the Absamer Klettersteig. The clouds hung low and shrouded the peaks above us from view. After an hour or so we left the road and scrambled across the scree slope to what we though was the start of the Klettersteig. Instead it was an unprotected and rather difficult scramble, but we managed to traverse our way round the cliff face to the true start and put on our equipment without anyone else spotting us. Shortly after we’d arrived, two other small groups showed up, and we let them go first, unsure of how fast we would be moving.

I ended up going first, on the basis that photos of people often look better from the front than from behind (I will let you be the judge of that). The first section was an easy grade A/B to get us warmed up, and then a brief flat section where you could escape. Here the sheer wall of the first grade C section loomed above us, and there was a key glued to the rock – this apparently symbolises the key point where you should turn around if you are unsure. Who says the Austrians don’t have a sense of humour?

We ignored the dire warning of the key and pressed on. The Klettersteig rose abruptly from the valley floor, and soon we were soaring high, with stunning views over the entire valley. The route was technically easy, but long and tiring, and as the sun rose and burnt away the clouds we found ourselves heating up quickly. There were frequent bolts in the wall labelled SOS with a number, presumably so you could tell Mountain Rescue where you were stuck.

The Klettersteig alternated between easier A/B sections on wide ledges, and more difficult C sections where you couldn’t just haul yourself up on the wire. There were a few notable moments – we’d all been excited to try the 3 Seil Brücke (3 rope bridge) but sadly one of the ropes had been knocked down during the winter, leaving the remaining two a bit suspect. Instead we had to go along a dodgy route underneath with another rope which was only connected at the top. There was also the Luftiger Schritt, or airy step, where there was no real foothold above a long drop, and you had to traverse with your feet on smooth, sloping rock. The Klettersteig also loved winding its way over boulder wedged in rifts, some of which looked rather precarious – even if they had been there for hundreds of years, they were going to fall at some point!

After 3.5 hours we made it to the top and headed to Bettelwurfhütte for a well earned lunch. We’d planned to do some more hiking, but as the weather turned we were happy to stay indoors and wait for dinner. There was some minor drama as the mountain rescue helicopter dropped off some paramedics to examine a man who’d had a nasty fall and was feeling dizzy – they took him down to hospital to be examined properly.

The next morning we got up for breakfast at 0630 and were moving by 0700. The plan was to walk back down to Eichatt and take a bus and train round to Stans where we could pick up the route which had been closed by snow to Lamsenjochhütte. The way down from Bettelwurfhütte was quite steep and slippery after the rain the previous night, and got more exciting when we reached the huge scree field which the path criss-crossed down. There were signs at the beginning calmly suggesting we move quickly to avoid being hit by falling stones, so we went as fast as we could, helmets on and heads down. At the bottom we saw some young Gams grazing on the scree slope, entirely unphased by our presence.

Bus, train, hike. Met some British guys also heading to Lamsenjochhütte with large packs. We saw them a few times during the day as we alternated stopping and overtaking. The way up is long and not especially interesting along mostly gravel forest tracks. The scenery is stunning, and the snow was still plentiful even at 1500 m, sheltered on the north side of the imposing Hochniss ridge. Just before the hut we spotted some Steinbock, mountain goats with huge horns, grazing far above us on a small mountain.

We were planning to do the Brudertunnel Klettersteig the next day, but despite the hut website saying it was clear, we couldn’t see how to reach it given the amount of snow in the way. Sadly we confirmed with the staff there that the Brudertunnel was closed, leaving us slightly frustrated – had we known, we probably would’ve have gone elsewhere.

After a quick drink at the hut, we decided to head up the small peak of Schafjöchl to the north for a look around. We were quickly at the top, where an inquisitive alpine Jackdaw started wandering around us, hoping for scraps. We ignored it, and got to work identifying the peaks we could see with a map and compass. As the clouds drifted and blocked our vision we managed to identify most of the principle peaks, and a possible route for the next day, before being driven back to the hut as the rain came in.

That night we chatted with three English women walking the Adlerweg who had had a rough time with the paths which had been damaged during the winter. We also caught up with the English men who had also been walking up at the same time as us, and a French/German couple who sat at our table. The hut was very full and everyone was very friendly. We got a early night again and I slept well despite the twenty other snorers in the room.

On Sunday we woke up early again, had the famous hut muesli and then set off over Hahnenkamplspitze. We wanted to prolong our day a bit by adding some extra peaks, so we also ticked off Gramaijoch before heading down towards Pertisau along the Falzthurntal. Along the way we did some more map work, and also met an unfortunate couple who had accidentally descended to the valley floor before realising they had taken the wrong route. We hope they made it to the Karwendelhaus, which was still around 8 hours away when we saw them! The final stretch along the valley floor was a slog, but eventually we arrived in Pertisau and took a few buses and trains back to Munich.

This was my first real taste of Klettersteig, and I loved it. Despite the fact we only got to do one in three days, I’ll definitely be back in the Alps again soon to try some more!