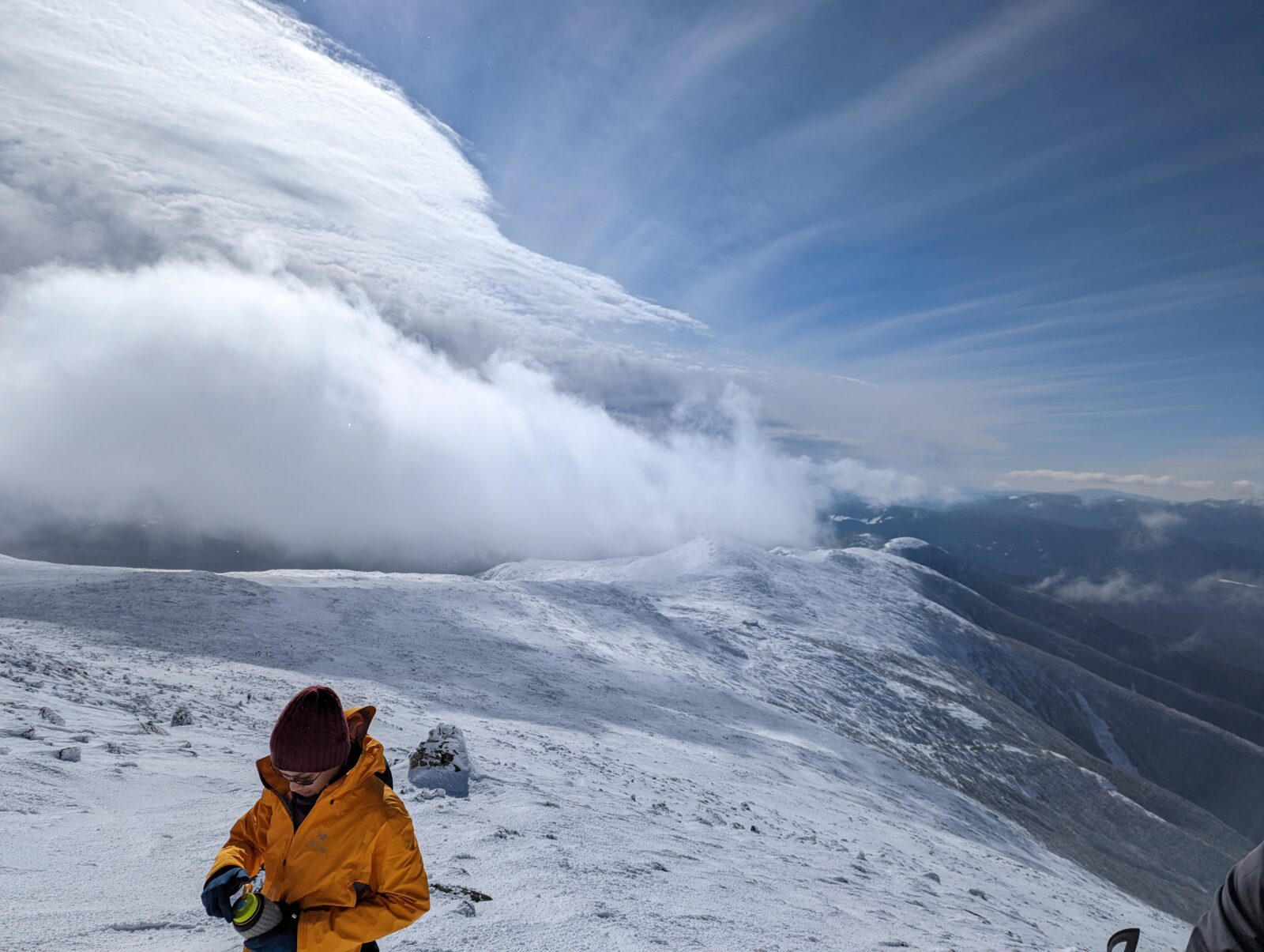 I’ve wanted to climb Mt Washington in the winter for almost a decade now, ever since I first hiked in the White Mountains of New Hampshire. In the summer, it’s easy to reach by car up the long auto-road, but in winter it’s quite another journey: above the treeline in the Whites is a truly special place, scoured by strong winds, dotted with boulders, and subject to rapidly changing weather and visibility. For most summits, the peak is only a short way above treeline, just a brief foray into that dangerous world for a summit photo, before retreating down again. Not so for Mt Washington, which stands proud and bare, the highest point on the long curving ridge of the Presidential Range, with long approaches above treeline from all sides.

This was also my first trip with MITOC, the MIT outing club. I’d avoided them for a bit, somewhat bored of student clubs, but I discovered that the club is actually open to everyone, and had a diverse set of members from students to faculty, and alumni to locals. I missed their trips in January, but when an email came through on a Tuesday lunchtime advertising a trip that weekend, I signed up immediately.

After a quick pickup at a cold grocery store parking lot at 4:30 am, we sped north into the brightening sky and increasingly snowy ground. We stopped for coffee at Dunkin Donuts in Lincoln NH (my first Dunkin experience, I’ll leave it at that) and arrived first at the Ammonoosuc Ravine trailhead. The others arrived shortly afterwards – nine in total, with two leaders. We changed into spikes and stamped our feet to keep warm as the clouds lifted, giving us an incredible view of the summit with the weather station on top.

We set off at a brisk pace, the ground well packed by many hikers since the last snowfall. I fell easily into chatting with the others in the group, after many pandemic filled months in a new country with little chance to socialise. We had a range of people, from someone who had hiked with MITOC for over a decade, to someone new to the club who had backpacked in the polar Urals. Most were MIT grad students, some staff and faculty, and a few from outside MIT.

As the path grew steeper and steeper we paused to change into crampons before heading up and above the treeline. Here the weather grew better and better, in marked contrast to the normal state of affairs. The clouds parted, the sun beat down and the wind dropped slightly, though the gusts were still enough to fill the air with glittery flurries.

Soon we were at the Lake of the Clouds hut, mostly shut in winter except for a small room to shelter in. The weather was so good we had no need of it, and after a few snacks we set our sights on Mt Monroe, the first summit of the day. After only one false summit we were at the top, climbing the steep slopes with ease in crampons and with an ice axe.

From that summit we could see Mt Washington clearly, a short drop into the saddle and then a long climb up to the top. I descended rapidly, practicing my plunge steps (the worn pages of my copy of Freedom of the Hills never far from my mind). At the hut again we reduced our layers and began the long climb. It was hotter than I expected and I suffered in the heat, despite having removed many layers. The sky was a perfect blue above and with every step I found myself gazing up at it, barely comprehending our luck with the weather and forcing myself to check again and again.

Finally the summit drew close, and we could see the strange array of buildings there – a museum, a restaurant, and the weather station, all closed to the public at this time of year. The pylons and dishes formed immense ice sculptures, carved by the ferocious wind that normally scours the summit, but today it was all calm. We met many others at the top, and stood around scarcely believing our luck. Some of group posed for topless photos, which would probably have been much more unpleasant on any other trip.

We were at the summit by 1315, five hours after we set off and still before our turn around time. Our descent was to be even more rapid, following the path of the cog railway down. This doesn’t run in winter, but there is a track alongside which is used by ski tourers and makes for a quick descent, though tough on the knees. Some of us removed our crampons and we practiced the delicate French art of the glissade, or butt slide. This gave me a chance to practice my self arrest technique, which was extremely fun.

We reached the cars at 1600, eight hours from when we left. We said our goodbyes and drove home, via another Dunkin. I managed to stay mostly awake for the entire journey back, and I was very impressed by our driver who had now been awake for over 12 gruelling hours. I got home at 2000, sixteen hours after I left, feeling very tired and very content.