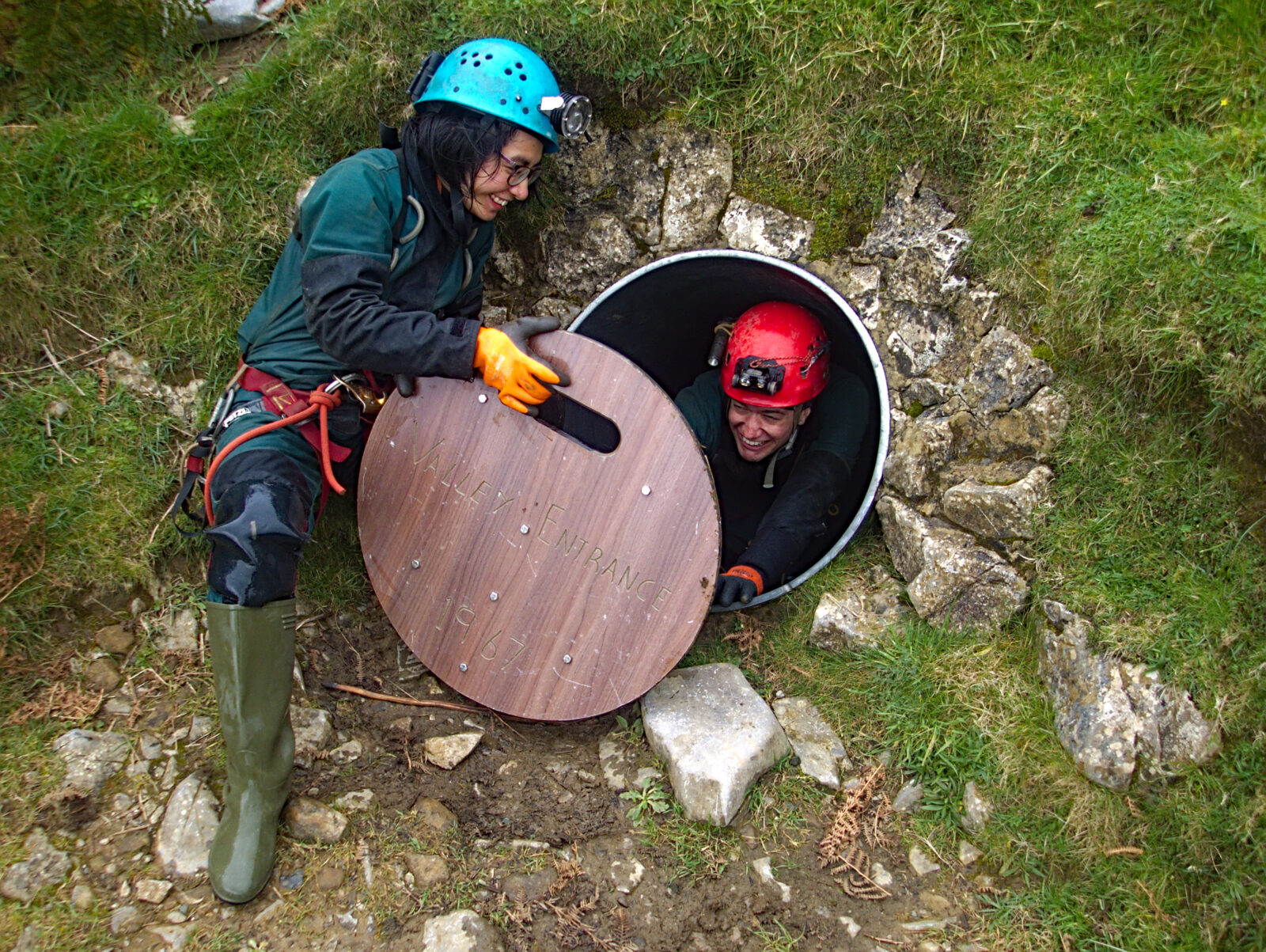 I drove over at a reasonable time to Kingsdale, and found Rhys and Cecilia chomping at the bit, already changed and ready to go. We were spared the pre-rigging trip in Valley Entrance by some other cavers who assured us it was still rigged, and then we trudged up the hill to Simpson’s pot, one of the finest pull-through trips in the Yorkshire Dales.

At the top, we wandered randomly into what we thought was the right field and looked for the cave. There is no real hurry, and caves are timid creatures, and often hide if you search too aggressively. Still, after a while we realised we had missed it. I was about to turn round when Cecilia said that there was a sheep stuck in a whole. Now Cecilia says a lot of stuff, but she was right – in a little shakehole, very thin and weary was a sheep, stuck tight, its legs in deep mud.

We called Rhys back, and wrapped a sling around the sheep. Rhys slid down, dislodging some grass which the sheep began to eat with great excitement. We fed her more grass to keep her calm, and then I pulled up, and with lot of effort freed the front legs, which Rhys held as if ready to dance. With another heavy the back legs were out, and the sheep tottered off, and began to contently eat grass. I hope it is feeling better now!

Back at the cave, and we slipped inside, admiring the nice wet crawl and then the free climbs in the Five Steps. The first section is good fun caving, quite dry, and very pretty rock. Soon enough we were down into the wet pitches, where we had to pull through, and then we slipped through the duck, soaking us nearly to our necks.

We clambered up some in situ tat into a high chamber, above the Swinsto Great Aven. I was avoiding Slit Pot, the other route down, because I have never managed to get through the tight pitch head, and trying it on a pull-through seemed like a bad idea. Instead, we slithered through the less narrow slot above the Swinsto Great Aven, and descended into that massive space, with a beautiful free hang that goes on for 30 m or so.

After that, we stumbled around Valley Entrance for a bit, exploring some of the tributaries that merge to form the master streamway. Then we stomped down the stream to the fixed ropes, and began the slightly too long crawl/stoop/clamber out to the surface.

Back on the surface, we commenced part II of the day. Time spent on reconnaissance being never wasted, we drove over the narrow, steep road to Deepdale, to check out a canyon. It proved to be pretty good, with five or six decent little abseils and a footpath to the start and the finish. Not sure about the legality of the middle bit, however. Still, worth some further research.

Back in the cars and we drove up to the saddle between Deepdale and Kingsdale, where the strong winds and the parafoil kite combined to make a fun 30 minutes of kite flying. Cecilia was almost blown away several times and had to be held down. She decided the object was to hit Rhys with the kite, but he was quick on his feet and survived every attempt.

A great day out – easy, fast caving, a nice little walk and a scout, and some kite flying. The Dales are lovely.