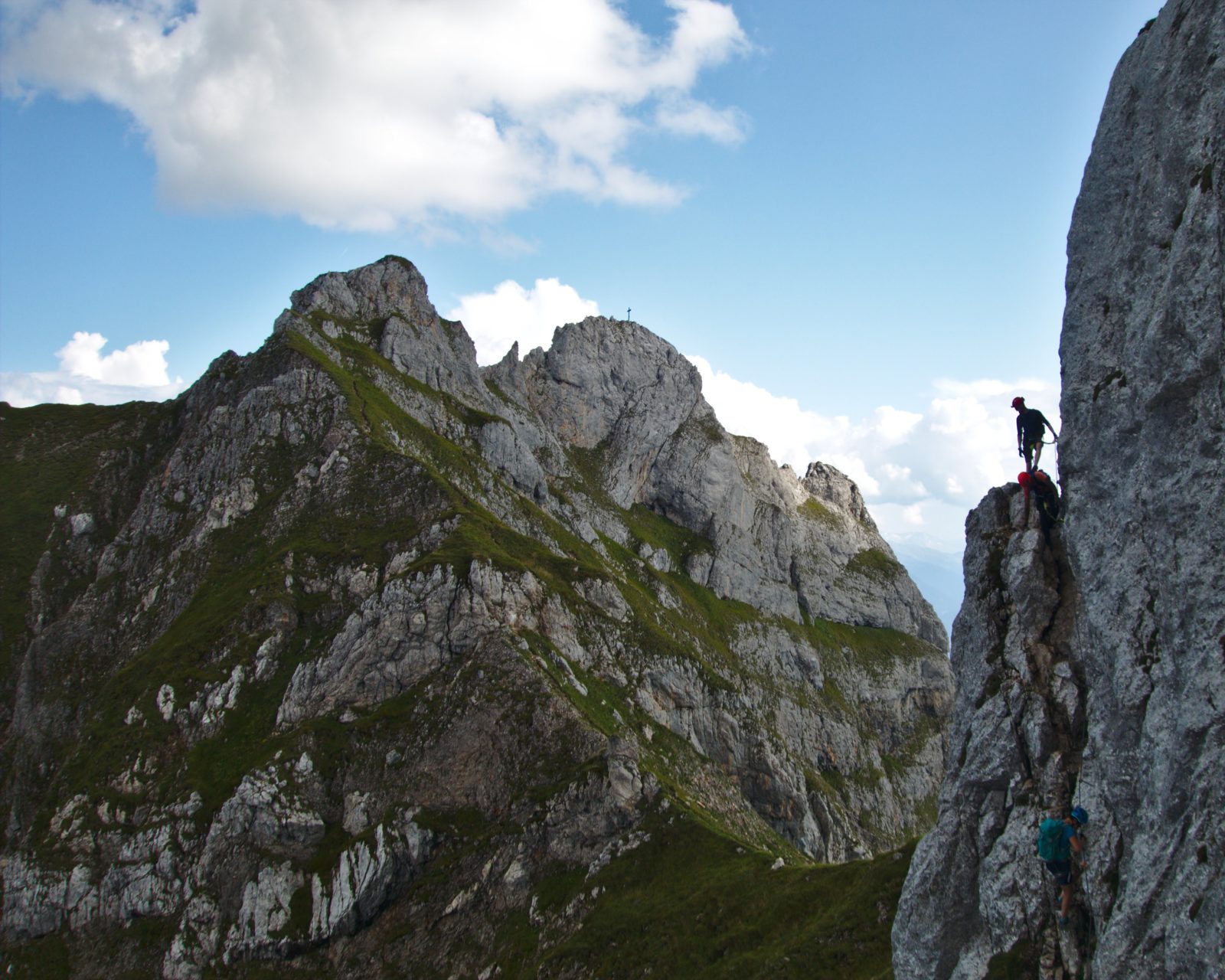 In which we bravely conquered four of the five peaks of the Achensee Five Peak Klettersteig, before running down the hill chased by a storm.

I wasn’t quite sure where we were meeting on Saturday morning, but it turns out there is parking underneath Donnersburgerbrücke, and we all eventually made it there to pile into Divi’s car. With some excellent karaoke and a scenic tour of the outskirts of Munich we wound our way passed Tegernsee and down into Austria, parking in Maurach. A sign ominously threatened that our car would be towed if we were still parked there at 6 pm [foreshadowing].

Our goal was the Achensee Fünf Gipfel Klettersteig. We enviously watched as others ambled over to the cable car, but we were Hiking Buddies! and made of sterner stuff. Instead, we braced ourselves for the 900 m of ascent up to the Erfürterhütte. Feeling self conscious in such an active group, I set a blistering pace up the mountain and we were there in just 75 minutes – 720 hm/hour, probably a record for me. After a brief pause to laugh at the rather boring looking Flying Fox, we headed south to Haidachstellwand, our first Klettersteig.

We paused for lunch and I helped everyone out by eating the excess food they had brought to complement my meagre supplies. Then we got our equipment on and powered up the very short first Klettersteig. Unfortunately a guy with two small children took this moment to descend, and was not interested in pausing, so we all found a safe place to shelter as he barrelled past. Soon we would be that guy as we in turn descended (!) the Klettersteig back to the plateau floor. The first bit went well, with no one coming up, but on the second section we waited for bit, and then decided just to scramble down, as a novice pair were climbing at roughly one clip every ten minutes.

Liberated from the Klettersteig, we bounded towards the imposing sheer face of Rosskopf. It really looked impossible from the bottom, but we set off again and proved it quite possible. The combination of more vertical sections and the exposure made it more physically and mentally tiring, but I have photographic evidence of most people smiling most of the time.

At the summit we stopped for second lunch and more sun cream, watched by a huge flock of Alpine choughs. We descended back down, and Goutam opted to hike up Seekarlspitze to get some awesome photos of us climbing it. The start featured a smooth traverse with few footholds, which then transitioned to a broad ledge before the final section. This was grade D, vertical and very smooth, but I actually kept thinking the worst was yet to come. And then we were at the top! Short and sweet.

We’d been keeping an eye on the time, and also the clouds as the rolled in, and we knew we wouldn’t finish all the five peaks today. After a quick jaunt up Spieljoch, we headed back down. Goutam and I opted to run on ahead with the car keys in case the sign was correct, and I managed to run most of the way without destroying my knee. Fortunately, there were plenty of cars still parked and no tow trucks. I waited at the car whilst Goutam went to get some bottles of beer, and the others showed up soon afterwards.

The drive back was eventful, with heavy rain and hail, reducing the visiblity to near zero by Wildbad Kreuth, but Divi drove very well. We parked again under Donnersbergerbrücke and most of us went to get a really good curry at the Royal India – highly recommended!