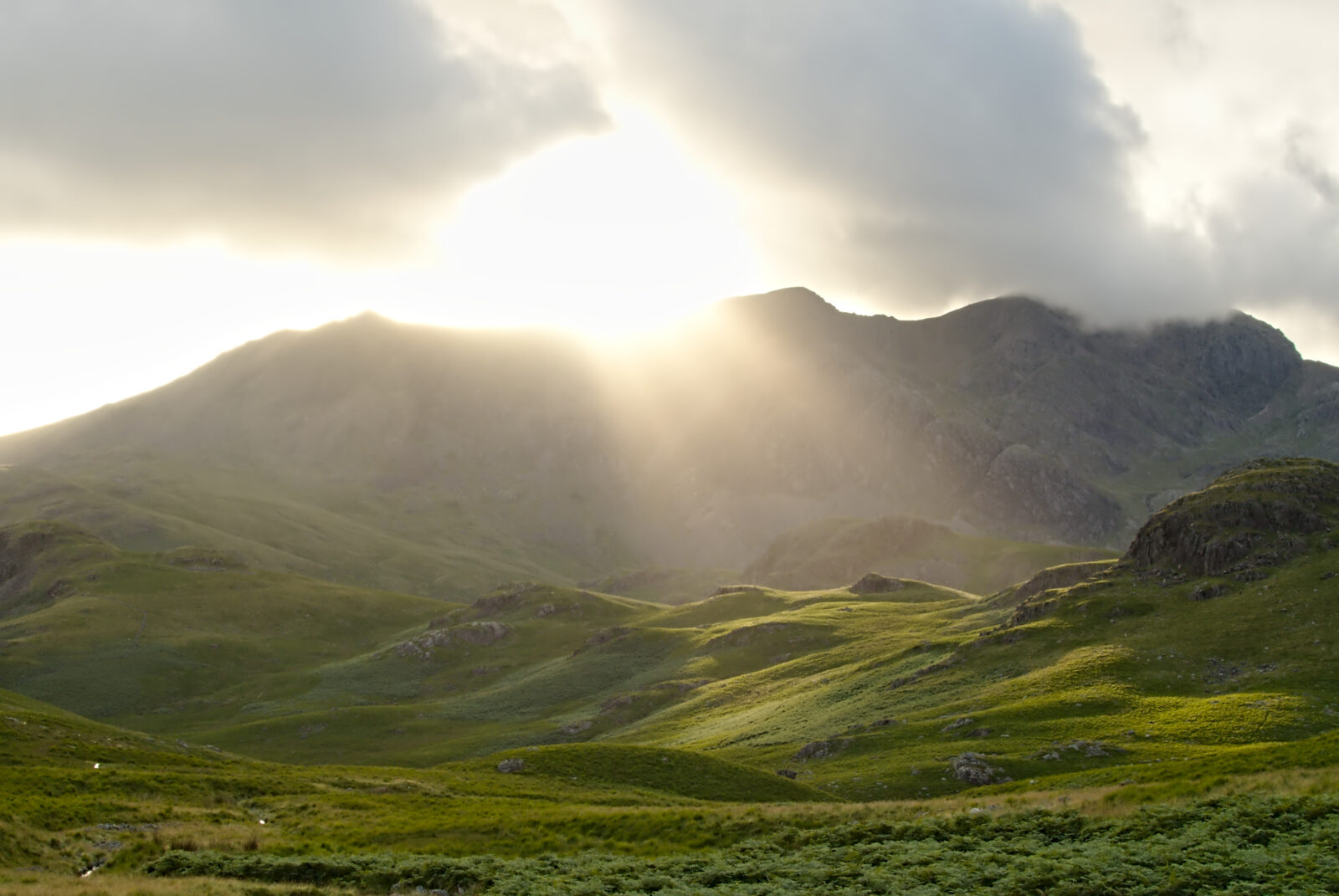 We camped for two nights in the caldera of a mega volcano, which gouged out this fantastic 15 km wide bowl in “the most violent episode in British History” [The BMC, clearly unaware of the scenes outside the Fulham Spoons on a Saturday night].

We parked at the bottom of Hardknott Pass, and hiked up with heavy bags for an hour or so. The ground underfoot was boggy and not at all encouraging, but as we got over the lip of the crater we contoured around, and found some flat dry ground a few hundred metres above Lincove Beck, near a small stream. We set up the tents and settled in for the night. I had brought my telescope, hoping to catch Comet Neowise, but it seemed quite faint and uninteresting. The moons of Jupiter were stunning, however, which justified the extra weight.

The next day, we woke to light rain, but after a big cup of extra runny porridge we were off, freelancing it across the bogs and up Lincove Beck to Ore Gap. This was a bit of a slog at first, but soon we were at the pass, where we had our first lunch. There was water surprisingly far up to Ore Gap, which might allow for wild camping on the small flat areas.

Now on the main track, the number of other hikers increased significantly, and a helicopter made repeated landings at Sprinkling Tarn, either carrying out a rescue or on an exercise, we weren’t sure.

We climbed up to Great End as a bonus peak, with wonderful views over the Gables, and then went across to Ill Crag. The rain set in, drenching us, but we soon dried out in the strong wind afterwards The summit of Scafell Pike was rammed, so we found a small subsidiary peak to sit on, from which we could see our tents a long way across the valley.

We descended to the pass between Scafell and Scafell Pike, and saw a poorly equipped family scrambling up a near vertical gully. We decided to leave before we saw anything unpleasant – there were many idiots around that day and we couldn’t watch them all.

We descended down to the river Esk, and decided not to attempt Scafell today. It was a bit of a scramble alongside a waterfall, and then quite boggy at the bottom, but soon we were back on high ground, on the central ridge which bisects the crater like an uvula. Another hours later, and we were back at the tents, and made a huge bowl of cous cous.

We went to bed early, tired from the long day, and woke up to glorious sunshine the next day. We freelanced it up to Crinkle Crags, directly behind our camp, and then wound away along the glorious ridge, with views in every direction. It was far less crowded than Scafell Pike, and easily as good. We turned at Three Tarns and returned to the tents, striking camp and getting back to the car for the drive back. The day finished perfectly with fish and chips.

It was very nice to stay away from home for the first time in four months!