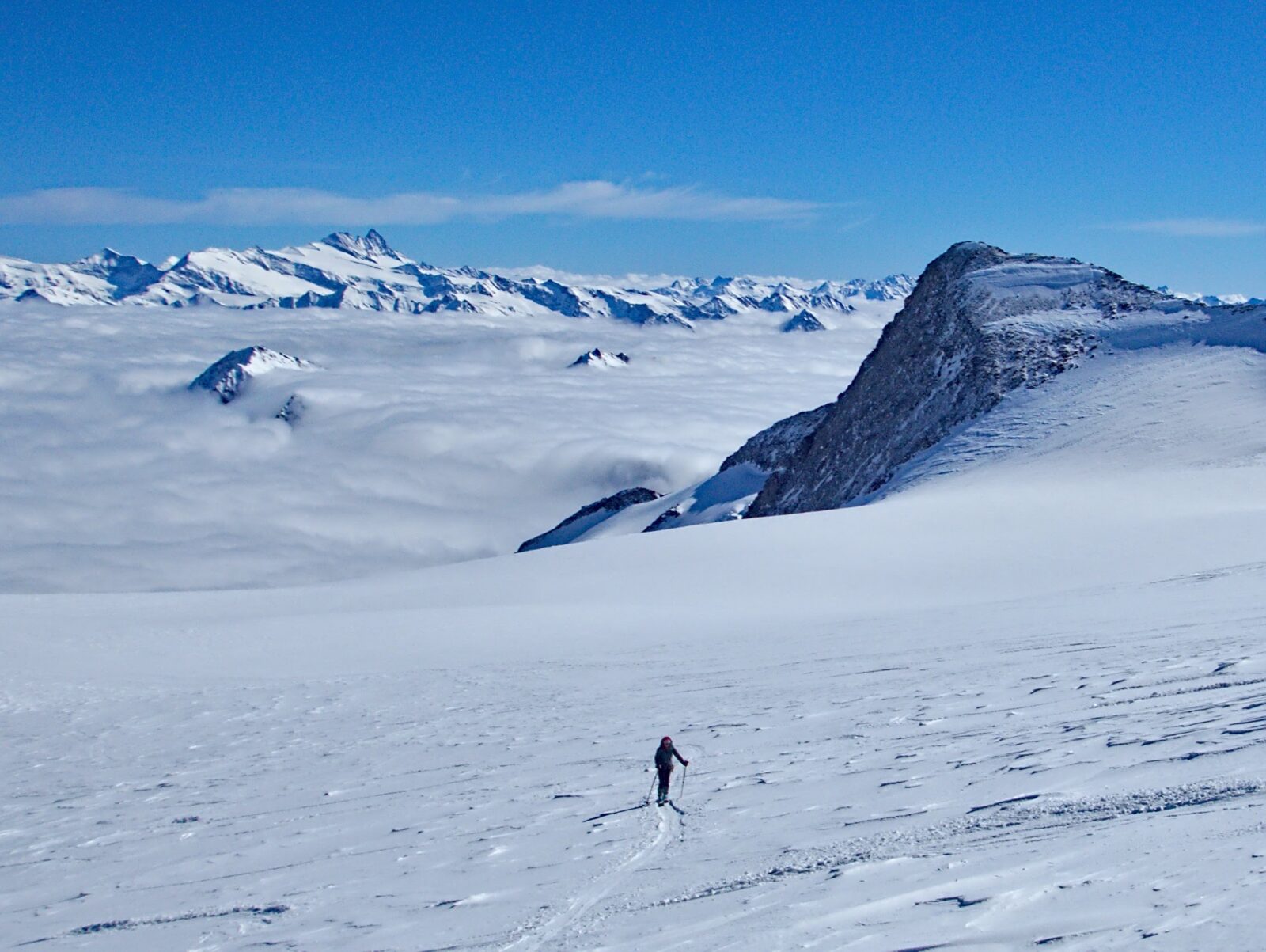 An incredible four days skiing up to Kürsinger Hütte in Austria, summitting a few peaks, crossing glaciers, and returning to a pandemic.
All Photos

This was our toughest day, a relentless slog up a long, mostly flat valley with heavy packs. We parked by the quarry (940 hm) around 10 am, with the road closed further on. The first section we walked in the gentle rain, skis on our backs, over patches of slippery ice and wet gravel. Eventually the conditions improved enough that we put our skis on, and as we climbed the first steep bends the rain turned to snow. The valley opens up, and is covered in snow. An elderly looking Gams picks its way up the slope, alone.

Far in the distance we see the peaks surrounding our goal, but we are still at only 1700 hm. We stop at Postalm for food and drink, and discuss the C-word (as we called it) with the owners. We stayed quite a while, maybe subconsciously aware of how hard the next section would be.

There were two steep climbs separated by long flat sections, past the cable car that carries food and drink up to the hut, and then up to the Turkish Tent City, once the foot of the glacier and filled with towering ice columns, but now a flat, frozen-over lake left by the retreating glacier. There was evidence of several avalanches reaching the lake shore and we cut a wide track away from them.

The weather had improved during the day, but as the sun set, the clouds came in and our visibility was greatly reduced. Fortunately there were wooden poles to follow, but the spacing made it difficult to see the next one and we had to follow the vague tracks as we climbed higher through gullies and huge boulders, heading for a hut we couldn’t see.

The sun set and we put on our headtorches. On one steep section there was a sharp, icy turn and I was grateful for the whippets (ice axe headed hiking poles) as I fell forwards and anchored myself in the ice before swinging my skis around. I sang all the Stan Rodgers songs I knew and finally we reached the high point of the route. We removed our skins and skied down in very poor conditions. The hut appeared in a blaze of light and we stumbled inside, tearing off layers and boots, and gobbling down a huge dinner and several medicinal Radlers. What a day!

Still rather tired, and with poor weather forecast, we decided on a quick trip up to Keeskogel, the peak behind the hut.

We could only see a few peaks looming above the clouds as we trudged back to the saddle where all the different routes split. We saw an explosion of white feathers, and heard the characteristic sound of a Schneehuhn, or ptarmigan – a low, phlegmy clearing of the throat.

We realise quickly that the peak we could see from the hut was not Gross Venediger, and that the true peak was further up the valley. We paused to admire the summit, with its many ridges, carved by glaciers, and impressive ice walls. That was our goal for the next day.

We break a trail that traverse across some open bowls of crusty snow, and pick our way between rocks to the base of the ridge. Here we leave our skis and carry on up the ridge, scrambling in touring boots and using the whippets for purchase. After a while we reach a flat section, and look up to the summit. It is a long way off still, and there are two small figures making slow progress. Unenthused, we decide to turn around and save our energy for the next day.

Skiing down was a bit of a pain, as I broke through the crust. In contrast, Munan floated over the top of it, making it frustrating to follow her line. The contrast was very low and we struggled to determine our speed or how steep the slope was, with the frequent rocks making everything a bit challenging. Still, we were soon back at the hut and we had a good nap.

That evening, the hut owner (a rather fat man who was/is a rather good mountaineer) got us drunk on Schnapps. We finally escaped around 9pm to try and grab a good night’s sleep.

This was the goal of this entire weekend, the summit of Gross Venediger, third highest mountain entirely in Austria, at 3662 hm. I hadn’t been this high since climbing Caltech Peak in 2015, and certainly not with skis and across a glacier! The previous night we sat in the equipment room, setting up 3 to 1 pulleys and reassuring ourselves that we knew what we were doing.

We woke early and the hut was buzzing. The weather today was perfect, and the hut was closing on Monday due to the C-word. So we ate a hurried breakfast, slipped into our harnesses and were skinning up to the saddle by 7am.

Skiing back down to the glacier, we could see no tracks ahead of us up the broad, featureless expanse. But there was a couple ahead of us who set off a terrific pace, which made it much easier to decide where to go. With Fabian in the lead, Munan in the middle and myself behind, we slowly made our way up the glacier, trying not to tug on the rope or provide any slack.

It was cold going at first, with no sun and a chill wind in our faces, but after an hour we burst into sunlight and stopped to change layers and slather on more SPF50. The crevasses we saw were safely far away, and I relaxed a bit. Other groups over took us, and I counted around 30 people heading to the summit from our hut. Some took a very high route from the hut, and crossed onto the glacier around 2900 hm, but this coverd much more distance and we felt our choice was still the best.

As the mountain drew closer, we could appreciate its complex topography. There were three steep, rocky ridges leading away, evenly spaced and carved by the glaciers flowing from the mountain. The north west glacier was incredibly buckled and look steep and treacherous. The north east glacier was what we were ascending on, relatively flat and terminating at the steep Venediger Schartl, between Gross Venediger and the shark-fin-shaped Klein Venediger to the east. The final south facing slope was only revealed later, but it was relatively flat and featureless as well.

The climb up the saddle was challenging – steep and icy, and narrow, requiring frequent kick turns. We stayed roped up, but many other teams unroped as it is complicated to keep the rope tight when going round a corner. Above the saddle we unroped and made our own ways up the broad, smooth flanks of Gross Venediger. The wind had blown the snow into fantastic sculptures, some still soft and powdery, others melted and refrozen as solid ice, and this made picking a route somewhat intellectually stimulating.

At the summit we met the mass of people coming from Johannishütte on the south of the mountain. At the ridge just below the summit, everyone left their skis and then walked the final few metres to the summit cross. The view was utterly stunning. We could see in every direction – across to Switzerland to the west, Bavaria and the Inn valley to the north, the rest of Austria to the east and into Italy to the south, the Dolomites floating like shipwrecks above a sea of clouds. We spent 30 minutes at the summit, in calm and warm conditions, before we decided to head down around 1330.

The skiing down was a bit nerve wracking at first, but we found a nice section of powder and slid down to the saddle. Here the turns were technical and precise, keeping to a thin band of snow surrounded by steep and treacherous ice. After one final and particularly challenging turn, we were onto the broad expanse of the glacier, and here the fun really began.

Sticking vaguely near our uphill track to avoid any crevasses, we swept down the mountain in perfect fluid motion. My confidence built and I began to link turns in beautiful sinusoidal shapes, controlling my speed and stopping occasionally to photograph the scenery and the others. All too soon we were back at the base of the glacier, where we stripped off as many layers as possible and dried out in the sun, before the steep and sweaty ascent back to the hut.

This was an incredible and unforgettable trip for me. The beauty of the mountains, the experience of being on a glacier, the teamwork and the shared struggle to reach the peak all made this a truly special journey. I’ll be back!

Another late start after our long trip the previous day. Most people were up early, snatching a last chance for Gross Venediger before the hut closed. But we had a less loft goal, another peak near the hut called Backmayrspitze. Leaving as much equipment as possible, we set off on another glorious day.

Almost immediately it was too warm, but as we slowly climbed into the bowl below the peak, a strong wind started to blow, and powder was flying everywhere. I went first, trying to follow the old tracks were were slightly easier to walk in than making a new trail. I zig-zagged between the lines of rocks lining the edge of the otherwise featureless slope, and focused hard on my kick turns. Though not objectively hard, this was still the toughest section we had done so far, and I was aware of the long run-out.

At the summit we had similar glorious views to the previous day, especially to the north, and of course we could admire Gross Venediger from a different angle.

Finally it came time to descend. The first section was vaguely fun, with some powder. But after that we had long traverses on crusty snow, and I fell and got my ski stuck under the crust at least once. Munan just floated over the top. We arrived back at the hut and collected all our equipment, and headed down. The hut was deserted.

The skiing was tough with such a heavy pack, the rope awkwardly strapped to the to throwing me off balance. I tried to keep leaning forwards and focusing on my turns. Near the lake, we had to cross some old avalanche debris, which we did quickly, mindful of the rising temperatures. Flat sections followed, where we tried a cross country skiing stride, but these were tedious and the best move was to pick up speed on the the downhill and try to make it across the flat bits without effort.

Endless skiing followed, not all of it enjoyable. We made it to Postalm and stopped for lots of food and drink. After an hour we realised we had to leave, and set off again along another long, flat section. The snow became more icy and eventually disappeared in patches. At first we carried our skis across, but eventually we strapped them to our backs and hiked the final 3 km. Back at the car, we turned on our phones and were amazed at the number of messages we had….