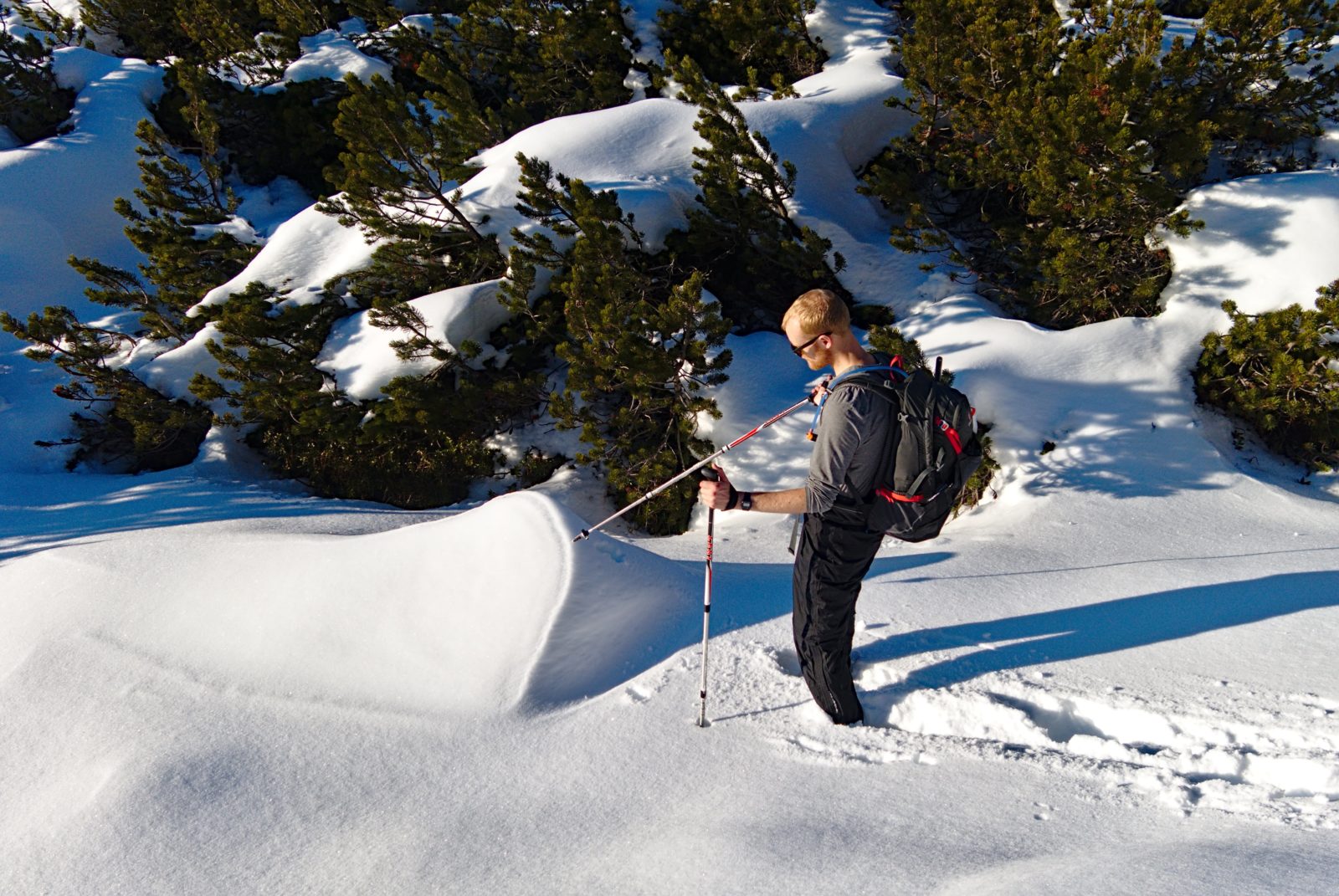 A mid-week jaunt up Pleisenspitze with Andy. This was my first hike in Munich when I arrived in March , and it’s an easy way to gain some serious height and use public transport.

We caught the early train and hiked in the shade up the frozen road towards the trailhead. The forest track was clear for most of the way up to the hut, and we only put on our microspikes about half way up. We were intrigued to see MTB tracks on the snow, but otherwise there were few other signs of other people around.

We passed the hut (sadly closed), and I made an emergency stop at ”Villa Rosenduft”, the excellent outside WC by the hut. Significantly, enlightened, I found my second wind and we made rapid progress through the dwarf pine as the snow gradually grew deeper.

It was hot work in the sun, and a stiff climb onto the east ridge of Pleisenspitze. We were soon in gaiters and shorts, following the footsteps of others as they zig-zagged up the peak. We stopped for food at what I thought was only thirty minutes from the summit – it turns out the summit cross looks far larger than it is, and we still had two hours to go!

Behind us, a dark shape rapidly was gaining. No matter how quickly we broke trail across the wind swept and increasingly steep approach to the summit, she got ever closer. At the summit we said hello, and found out she was a resident of Scharnitz, the town in the valley. ”It must be nice to live there.” We said. ”It is.” she said. We stood in silence, and then she headed back home.

City boys that we are, we stayed to photograph the incredible scenery. The views were stunning – in March the visibility had been close to nil, but today we could see everything. After gawping for a little too long, we headed downhill.

Somewhere in the huge, plunging steps and whooping, I lost a microspike from my right foot. If anyone finds it, please return it – it’s black and underneath lots of snow. Still, we made good time down to the hut, where we met an old boy on an e-bike, explaining the MTB tracks.

As we got near the road, we realised we were a bit late, and needed to catch the 1730. We power walked at a ridiculous pace towards Scharnitz, and made it 30 minutes early (Andy: ”I have long legs, but I’ve never met anyone who walks as fast as you.”)

In town we were greeted by ferocious monsters, hairy and with horns and birch whips. Fortunately, Andy realised it was Krampusnacht, an alpine tradition where St Nikolas’ demonic helper punishes bad children by beating them with a stick. So that’s okay then.