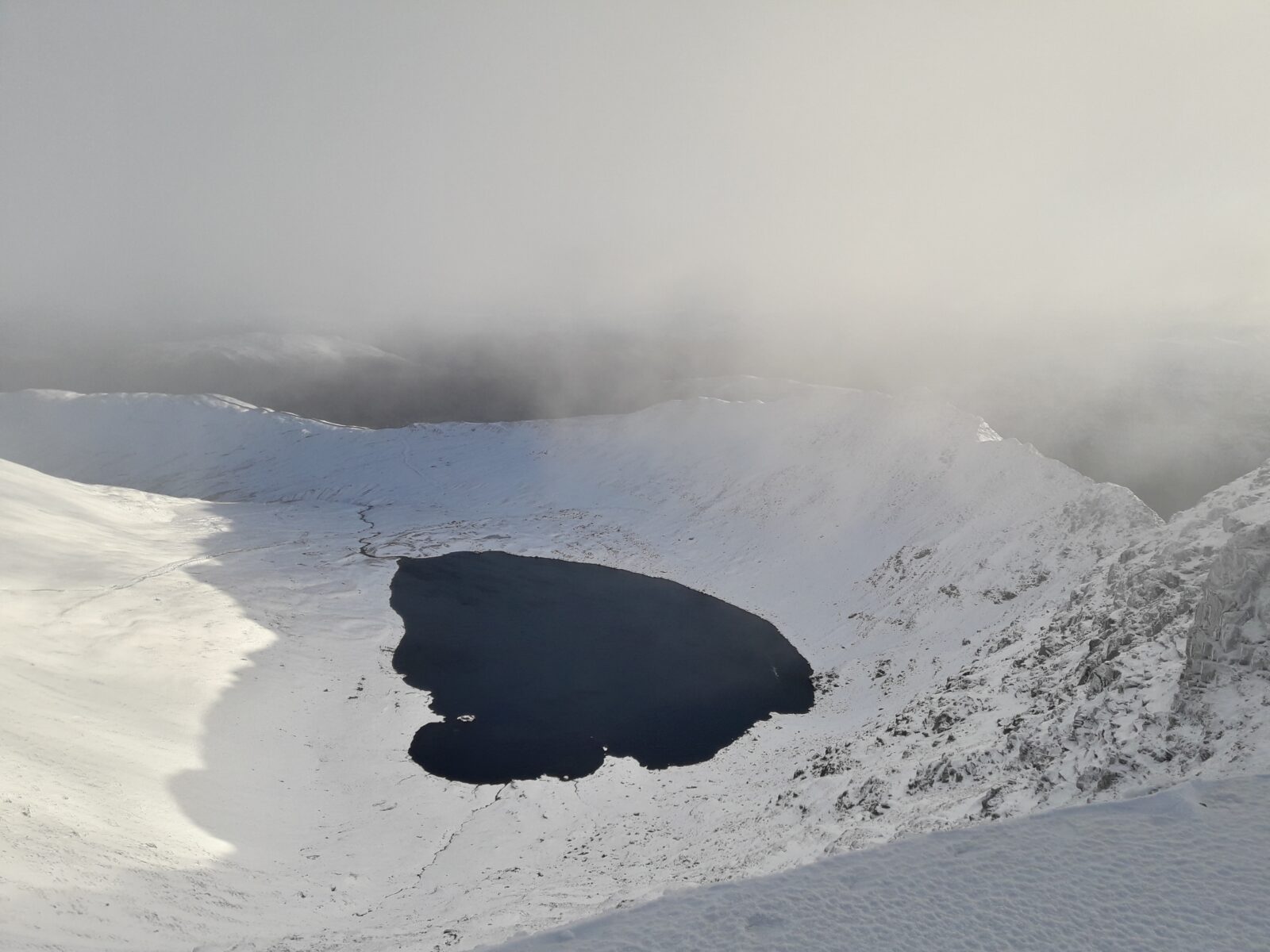 A few days before Christmas, my Dad and I realised we needed to get out of the house. it had been a long year for a variety of reasons, and the thought of spending Christmas in the same place ads the previous nine months was unattractive. So we got online, found a holiday cottage in our favourite part of the Lake District, loaded up the car with an obscene amount of food and alcohol, and drove across to Ullswater and Glenridding.

We awoke early, and set off in the dark, walking down the road to Patterdale, and then up the steep road into Grisedale. We had no idea that the rain we had driven through the previous day had fallen as snow on the peaks, and so it was a bit of a surprise to see so much of it on the route ahead. The ground underfoot was icy, and we wished we had brought microspikes for grip.

It was cold and extremely windy as we arrived at the Hole in the Wall. Several other groups were already climbing Striding Edge, some of them very poorly prepared. A little intimidated by the conditions, and having no wish to be stuck behind slow moving novices, we opted for Swirral Edge. We crossed to Red Tarn, and observed several people coming down with ice axes and crampons. We scoffed at this – surely overkill for the Lakes so early in the season?

On the way up Swirral Edge, we began to realise why everyone was so well equipped. The rock was icy and smooth, and it was hard to find good footholds. Even so, we made it up with only one detour, and we were soon on top of Helvellyn. Microspikes would have been useful, but an ice axe still seemed like overkill.

We sheltered at the cross of walls near the summit and had some hot soup and food. Then we set off north, towards White side. The wind blew ferociously, making it hard to stand, and whipping ice crystals into our eyes – ski goggles would’ve been useful! The sun skipped in and out of cover behind the clouds, creating dramatic lighting through the mist and flurries of snow.

We made good time up and down along the ridge, stopping to chat to several hikers who seemed equally glad to be out on such a day. We dropped down at Sticks Pass, getting a good view of the ski tow. At Nick head, we went left down Bleabank Side, dropping below the snow line, but still in unpleasantly icy conditions. Eventually we arrived at Seldom Seen, a beautiful named set of miners cottages, now owned by the National Trust. From here, we headed back along the footpath alongside Ullswater, and home to the cottage.

For Christmas day, we planned to do a shorter hike, and so we had a bit of a lie in. The sun had already risen as we trudged back down to Patterdale, and again up into Grisedale. Here we changed our route from yesterday, and headed up the steep path to the whimsically named St Sunday Crag.

Again, the way was icy, and we made slow progress up onto the summit. The weather was worse than yesterday, with strong winds and low clouds. We sheltered in the saddle at Deepdale Hause and ate a quick lunch, and we watched as a couple ahead of us made slow progress up the steep climb to Fairfield.

It was slightly scrambly up to Fairfield, and again we regretted leaving our microspikes at home. On the top, Fairfield was utterly, bizarrely calm. Despite the strong winds the threatened to knock us from our feet on the ascent, at the summit there was nothing. It was eerily quiet as well, as we walked through the thick fog, following a compass bearing and looking for cairns. Suddenly, there was a loud park behind us, and two fox hounds dashed by, heading off at high speed. We met them again, twenty minutes later, headed the other way. We didn’t see their owners at all – what were two dogs doing so high up, lost in the clouds?

We descended Fairfield via Hart Crag, finding ourselves a bit off the path and on a rather scrambly route. After a few complications, we managed to get onto flatter ground, and descended the series of humps to the valley below. We met only one other hiker, who said he’d seen the mountain rescue pulling someone off the hill – later inspection of facebook suggests this was someone who had tried to camp overnight at the Priest Holes, but had found it a little too cold.

Back in the valley, and we had to walk back along the road for a few km. This was rather boring, but we were soon home, much later than intended. Although we’d planned a pheasant stew for Christmas dinner, we were too exhausted, so we had a quick risotto instead – a new Christmas tradition?

We were quite tired on Boxing Day, so we drove to Rydall Water and walked the smooth, flat track around the lake, before checking out Wordsworth’s house. Then the storm came, and we retreated home.

The next day, we set off up to Angle Tarn. The conditions were poor, and deteriorated, and with strong winds blowing ice crystals into our unprotected eyes, we decided to turn back, having hiked for about 11 km, or 4 hrs. On the way back, we were thoroughly soaked as we descended into the valley and snow turned to rain.

This was planned as an easy, short hike on our last day, but due to the exceptional weather, it was probably our best day. A lot of snow had fallen the previous day, and stayed cold overnight. We started off walking along the relatively flat path around Ullswater, with glorious views up to Helvellyn and the rest. We turned south at Scalehow Wood and headed up towards Place Fell, startlingly a large herd of deer.

We stopped for lunch in the sun at a ruined house, and said hello to a few other hikers. From here, we took the curving trail up Place Fell, rather than the more popular direct route, and we were rewarded with the sight of a huge herd of deer, moving across the frozen uplands. I counted 48 in total, with stags, does and juveniles all together.

We then began the steep descent down from Place Fell, meeting many more people along the way. The deer paralleled us, moving further down the steep flanks of the hill, now better disguised in the thick brown bracken. The weather was glorious, the air clear, and we sat and had a second lunch to prolong our time in the hills.

We got back to the car, exhausted from our hiking over the past few days, but very much rejuvenated. What a great trip!