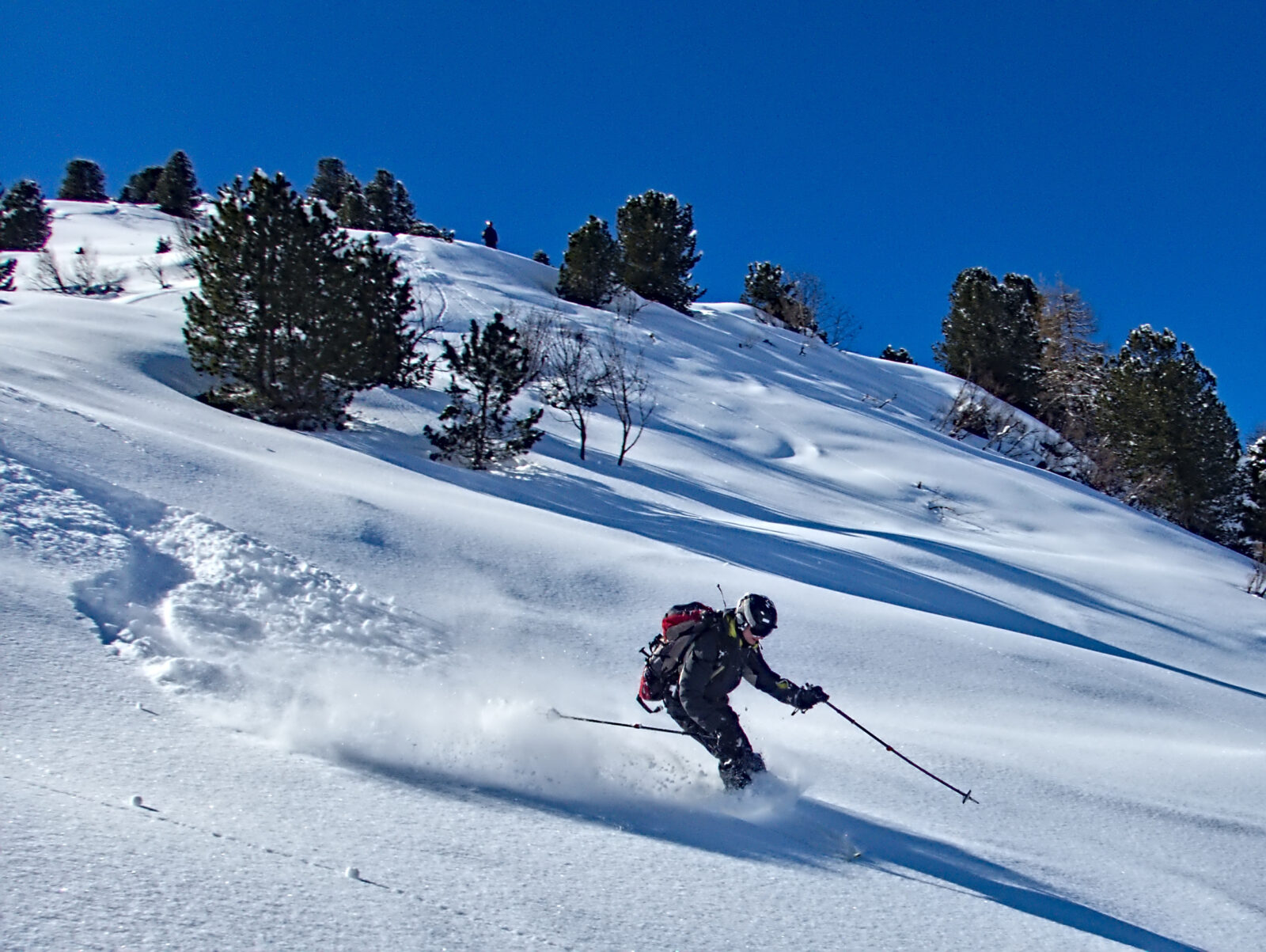 On Friday evening I headed down to Innsbruck, with a compact but extremely heavy bag, with boots lashed to the outside and a pair of skis over my shoulder. Tanguy had made a quiche, because of course he had, and we had a few beers, looked at the route for the next day and got an early night.

The next morning it was raining as we trudged through the city to the main station. We caught a train and then took a bus up to Navistal, a valley south of Innsbruck on the way to the Brenner pass. The snow conditions looked dire, but as we rounded the final corner we were rewarded with a glimpse of what lay above.

We stashed our hiking boots in a dry bag by the path (the disadvantage of public transport – nowhere to store your shoes) and headed up a forest road. It was Tanguy’s first ski tour, but he was very quick, and I soon let him break the trail as the snow became deeper and the previous tracks became fainter. We could see no one ahead of us, and we passed by several deserted farms as we gently climbed the main valley.

On the left and right are many side valleys offering alternative ski tours. We had picked Silbersattel as a safe, low gradient choice. A wide bowl leads to the ridge, and we had complete freedom to pick our path up to the top, with no tracks ahead of us. The weather was changeable, with strong winds and snow followed by sunshine and warmth. We reached the saddle and tried to go on a bit, but the wind-blown snow was hard and quite weak, and we decided to make this our summit. We had a quick Gipfelschnapps and headed down just as the weather took a serious turn for the worse.

Visibility was poor on the descent, and more than once we ended up in little bowl or depressions and had to climb back out. It was hard to see how steep the slope was before you were on it, but we kept our sense of direction and soon we were below the worst of the weather. The powder was deep and very fun to ski. In no time at all we were back in Navis.

Unfortunately, the first bus back in the afternoon is at 1702, so we had three hours to kill. Fortunately there was a rather nice Gasthof nearby, so we slowly ate and drank our way through their menu until the bus arrived and we could get back to Innsbruck. Navistal is an incredible unspoilt valley, and a real paradise for ski touring.

The next day we joined Gasparde and Remi, two French guys living in Innsbruck for a ski tour in the Tux Alps. It was a popular day, and we couldn’t get close to the car park and had to walk a way up the road to get to the snow. Hundreds of ski tourers poured up the long track into a valley with an incredible range of ski tours. We picked a likely looking route up to the peak and followed a dozen or so people ahead of us along a well broken trail through deep powder.

Remi and Gasparde are extremely fast, and Tanguy and I struggled to keep up. I’d like to blame my heavy skis, or our exertions from the day before, but I doubt that’s the whole story. At the summit we caught our breath, had a small picnic and surveyed the route down. It looked steep, but the snow was lovely and as soon as I set off all my worries vanished.

Again we were down far too quickly. In the deep powder it was impossible to ski badly, and with the strong sunshine every photo looked incredible. We slid gracefully down the forest track and back to the Gasthof at the end of the road for a beer and a seat in the sun.