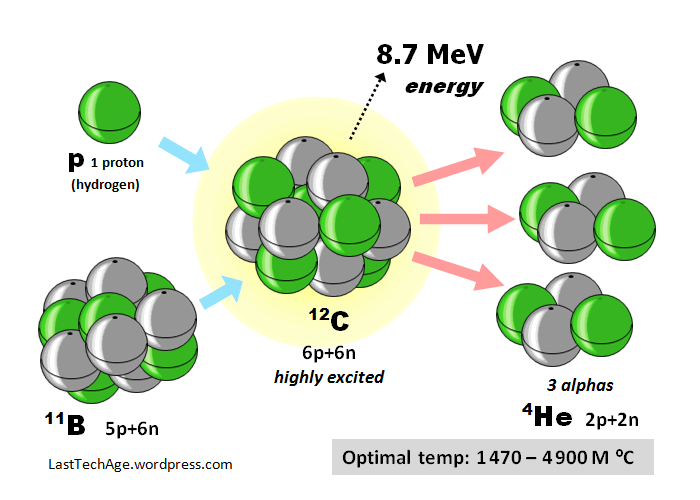 One big problem with achieving controlled thermo-nuclear fusion is the neutrons coming from the plasma. Neutrons are sub-atomic particles with no charge, and so cannot be controlled by magnetic or electric fields like the other particles in a plasma. They penetrate deep into the materials surrounding the plasma, causing massive damage and even transmuting the materials – the elemental composition is literally transformed!

These issues have lead many people to consider alternative fusion fuels. The standard fuel is a 50:50 mixture of deuterium and tritium – hydrogen with one or two extra neutrons respectively. This is the “easiest” fusion reaction to achieve, requiring temperatures of “only” one hundred million degrees Celsius. There are other fuels possible: deuterium and helium-3 (a “light” type of helium with only one neutron: rare on earth, plentiful on the Moon), pure deuterium, and the rather more challenging hydrogen and boron-11 (a type of boron).

The last fuel mixture is often shortened to p-B11, where the p stands for proton, which is all a hydrogen atom is once you’ve stripped the electron. This reaction is very attractive when you look at what’s produced – no nasty neutrons, just three alpha particles. But it’s also very difficult to achieve – the temperatures needed are higher by a factor of ten – over a billion degrees Celsius! Given the difficulties already encountered with achieving deuterium-tritium (or DT) fusion, this does not look easy. Despite this, there is at least one private fusion company attempting this route – Tri-Alpha Energy (three alpha particles, get it?). They’ve raised several hundred million dollars in venture capital, so someone obviously thinks they have a shot.

But why are are the high temperatures needed for p-B11 fusion so difficult to achieve? One limiting factor is the amount of light the plasma emits. We’re all familiar with this process – if you stick a poker in the fire, it becomes “red-hot”, emitting light that we perceive as red, but is mostly in the infra-red. That’s at only a few hundred degrees – for a plasma at a billion degrees, the light is mostly in the x-ray range, and there’s a lot of it! This radiation is often called “bremstrahlung”, a German word that roughly means “braking radiation” – the plasma emits light (electromagnetic radiation) when the electrons slow down, or “brake”. This bremstrahlung can be so large that the plasma may lose energy faster than it can gain it through fusion – at this point the fusion reaction cannot sustain itself and it rapidly cools. There’s long been a belief that most forms of aneutronic fusion cannot sustain a fusion reaction due to these losses, an indeed there was a famous PhD thesis in 1998 from Todd Rider that tried to show this.

So when a new paper popped up on my RSS feed yesterday with the title “Fusion reactivity of the pB11 plasma revisited”, I was intrigued. Especially because one of the co-authors is Dmitri Ryutov, a well-known theoretical plasma physicist who has made contributions from tokamak divertors to inertial confinement fusion and laboratory astrophysics. The authors note that the inclusion of some subtle quantum mechanical effects can modify the “cross-section” of the pB11 reaction. The cross-section is how physicists express the likelihood of a reaction, and it has the units of area. The new cross-section was calculated by considering the angular momentum of the reactants and products in the fusion reaction, quantities which have to be strictly conserved, and here lead to an increased cross section.

The authors combine this cross section with some kinetic plasma physics, considering that some of the particles in the plasma are moving very quickly, and it is these particles which actual undergo fusion, rather than the bulk of much colder (but still extremely hot!) particles. After crunching the numbers and comparing the fusion power output to the bremstrahlung losses, they conclude that pB11 fusion might just be feasible at around 300 keV, which is roughly 3 billion degrees Celsius. All of this is done under rather ideal conditions where the plasma has no other ways to lose power (conduction to the wall, radiation by impurities etc), but the new calculations do show it was much more likely – the fusion power has increased by around 50% at 300 keV.

So where does this leave pB11 fusion? I would say it still doesn’t look great. Possibly under very conditions a reactor could be feasible. Maybe you can heat only some of the ions and leave the rest cold. Maybe you could have a power plant with a very high recirculating fraction, where most of the bremstrahlung radiation is captured, converted efficiently to electricity which is then used to power the heating systems that sustain the plasma temperature. Maybe future revisions to the cross section will push the fusion power higher (but they might also revise it downwards!). Of course, as a human concerned about climate change and looking for renewable energy sources, I want pB11 fusion to succeed – I want fusion to be easy! But if there’s anything we’ve learned in the last sixty years, it’s that controlled fusion is not easy.

This is a very quick overview of an interesting paper I found online. I’ve tried to write this post in under 30 minutes, following the advice I found here for scientific blogging.