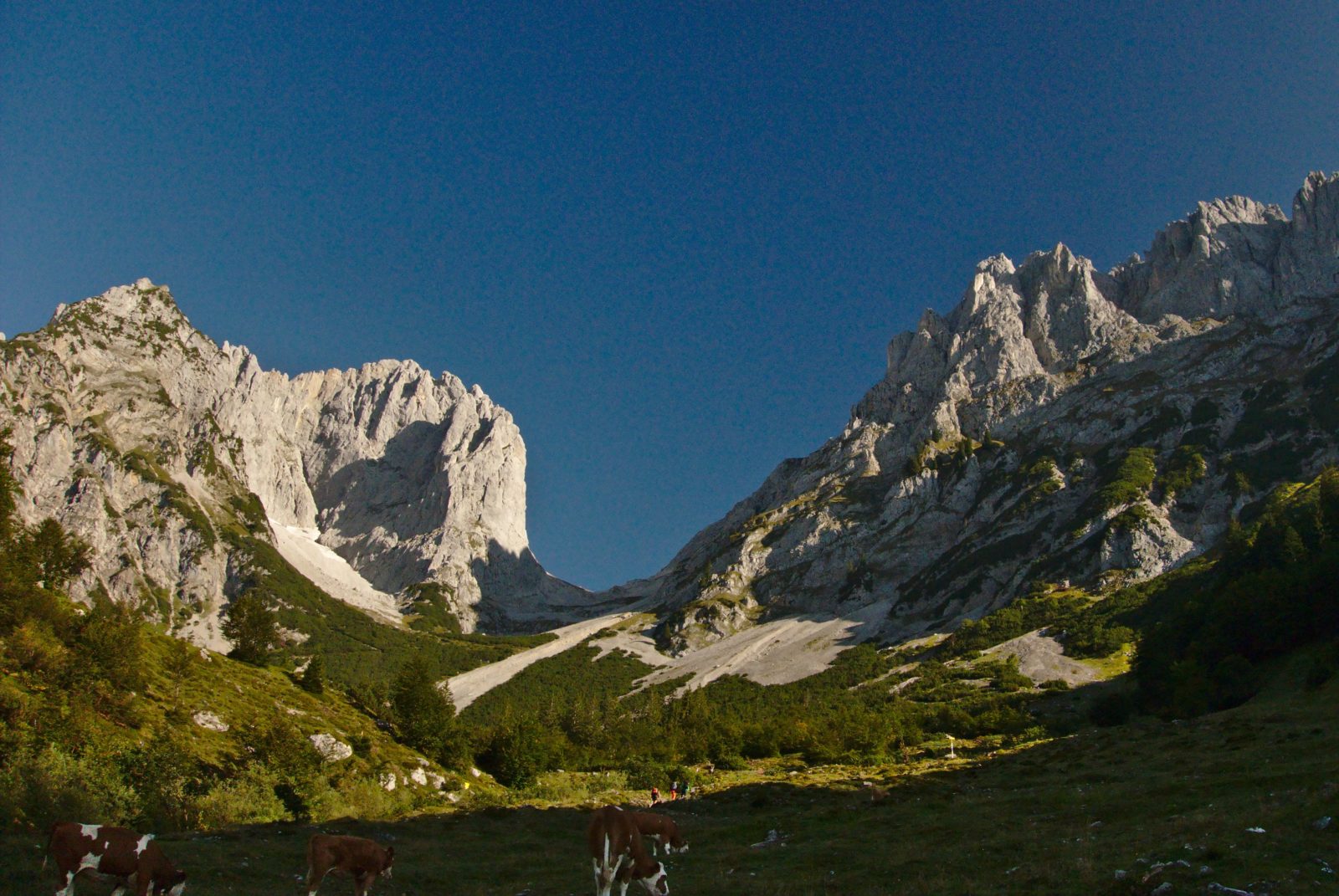 The day after canyoning in Trockenbach, we dragged ourselves out of bed again to go climb the highest mountain in the Wilder Kaiser. I’ve done two trips to the lower Zahmer Kaiser range to the north, and both times I’d admired the incredible sheer north face of the Wilder Kaiser ridge, with impossible looking pinnacles pushing up into the sky. Today, we got to go look from the other side!

Katharina picked Andrew and myself up at Freimann, and along with Anton and Johanna we joined the queue of other Munichers heading into the alps. Eventually we made it to the parking at Wochenbrunner Alm, and started the hike up at exactly 9 am. One hour later, sweaty and slightly out of breath we were 700 m higher, at Gruttenhuette, where we stopped for a quick drink, before heading towards the imposing south wall of the Wilder Kaiser. Yes, the Wilder Kaiser are imposing from both sides, it turns out!

We crossed a small snow field and then changed into our harnesses and helmets. The first section was easy, with some cables to secure the path, but we felt no need to clip in. There were several people without any equipment, or with just a helmet, or just a harness. Given the number of rocks tumbling down, I would’ve thought a helmet is at least a good idea – no matter how sure footed you are, you can’t do much about someone else kicking a rock down on you!

We rounded a corner and started the rather bizarre Jaegerwandtreppe. Here is a series of metal steps made out of u-shaped rebar, driven into the wall. The rebar are only a metre or so above the floor, and head upwards at about 45 degrees. There were a lot of people coming down, so a few of us “climbed” from underneath, using the rebar as monkey bars for support. I guess it keeps you away from a lot of loose rock which you could kick down, but it was odd to see people clipped in so close to the ground!

After this comes a few short scrambling sections, and then more Klettersteig, which briefly divides into a left and a right branch before rejoining. We followed the flow and went up on the right and later down on the left branch. There’s a small hut for emergencies (such as a thunderstom coming in) just below the summit, and then the summit itself – not particularly large, but big enough for a few dozen people. From here you can see lots of awesome mountains – the Zahmer Kaiser to the north, the Karwendelgebirdge and the Rofan, and the Kitzbuehler Alps and Grossglockner to the south. We ate more food, got some pictures taken and then eventually headed down.

The route down was uneventful, but the views were really stunning. We weren’t delayed long behind anyone, and soon we were back at the hut. I had a lovely Apfelstrudel and a Spezi, and then we went at high speed down the mountain to the car.

The traffic back was appalling, and Katharina did a great job dealing with it. A great trip, quite busy in places, but with excellent views.