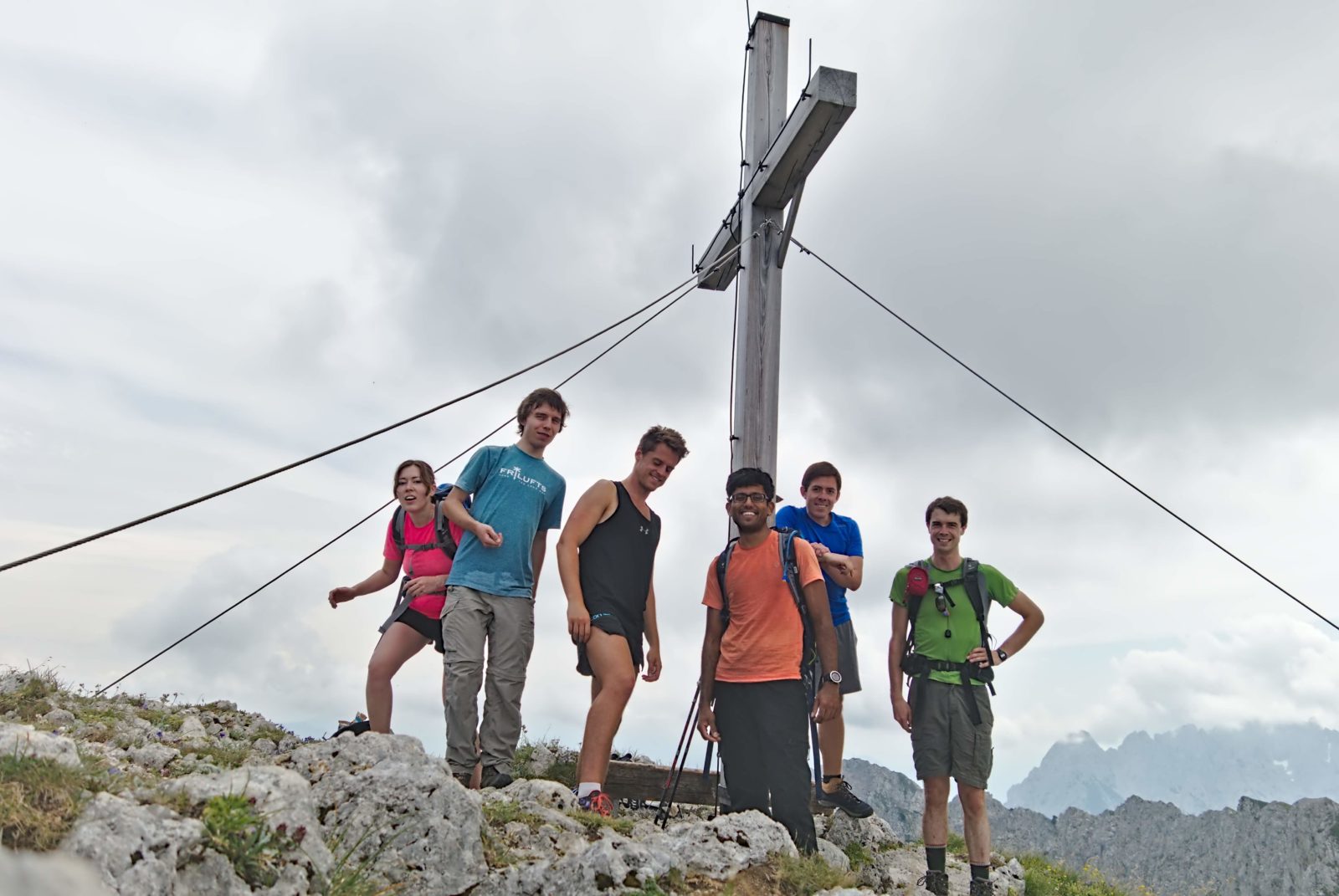 Julien drove us in his shiny new BMW to the parking lot in Oberdorf, just north of Kufstein. Here we started up the very steep (1:3) path to Ritzaualm. It was quickly obvious that I wasn’t going to keep up with Julien, so I settled into a slower pace at the back with Daria and Imre. Slower, yes, but we still ascended 900 m in 90 minutes, which is fast enough for me.

Dripping in sweat, we emerged at Ritzaualm, looked at the goats and then went up to the Vordererkaiserfelderhuette, pausing only to admire the view. We skipped Naunspitze, worried about our timings with the storm forecast some time in the afternoon. We briefly took in the view at Peterskopfl then continued across the plateau to Einserkogel.

The plateau was unrecognisable from our trip here a four months ago, when it was entirely covered in snow: https://photos.app.goo.gl/YwdU6vuZrPY1kNqs7
Instead of walking over the top of the dwarf pine, we had to navigate around the many dolines and winding paths. Eventually we reached the steep climb up Zwoelferkogel, where we’d been forced to turn round last time due to deep snow. Much easier with a path!

We caught up with Julien and Sergio at the summit of Pyramidenspitze, where we ate some lunch and identified some of the peaks in the Wilderkaiser, looming to the south. Then it was a fast trek down hill, and then a traverse around back to Vordererfelderkaiserhuette. We all had one course, but with the clouds coming in we convinced Jerome and Daria not to go for an Apfelstrudel as well – this turned out to be a very. good. choice.

The descent was unbelievably steep – did we really come up this way? The thunder grew louder from the west and it became dark – I only realised this when I tried to photograph a Gams and got 1/4 s on f1.8. We arrived at the car with Julien, Daria and Jerome close behind.

Just as we got inside, the heavy rain started. As Julien drove, the hail began, light at first, but then the size of gravel, creating an incredible noise on the car roof. Julien first selected a big tree to park under, but as the hail got worse he spotted a barn next to the road, and drove under it to get some shelter.

Just as well – the tree we had been under fell over shortly afterwards, and the road out was completely blocked. Fortunately, a nice young woman and her father showed up with a chainsaw and a tractor and began to clear the road. She said that this storm was very severe, and she’d never seen anything like it before. We did out best to help and got completely soaked through. The drive back was slow and tough, but Julien got us there. What an exciting end to an otherwise well-timed hike!