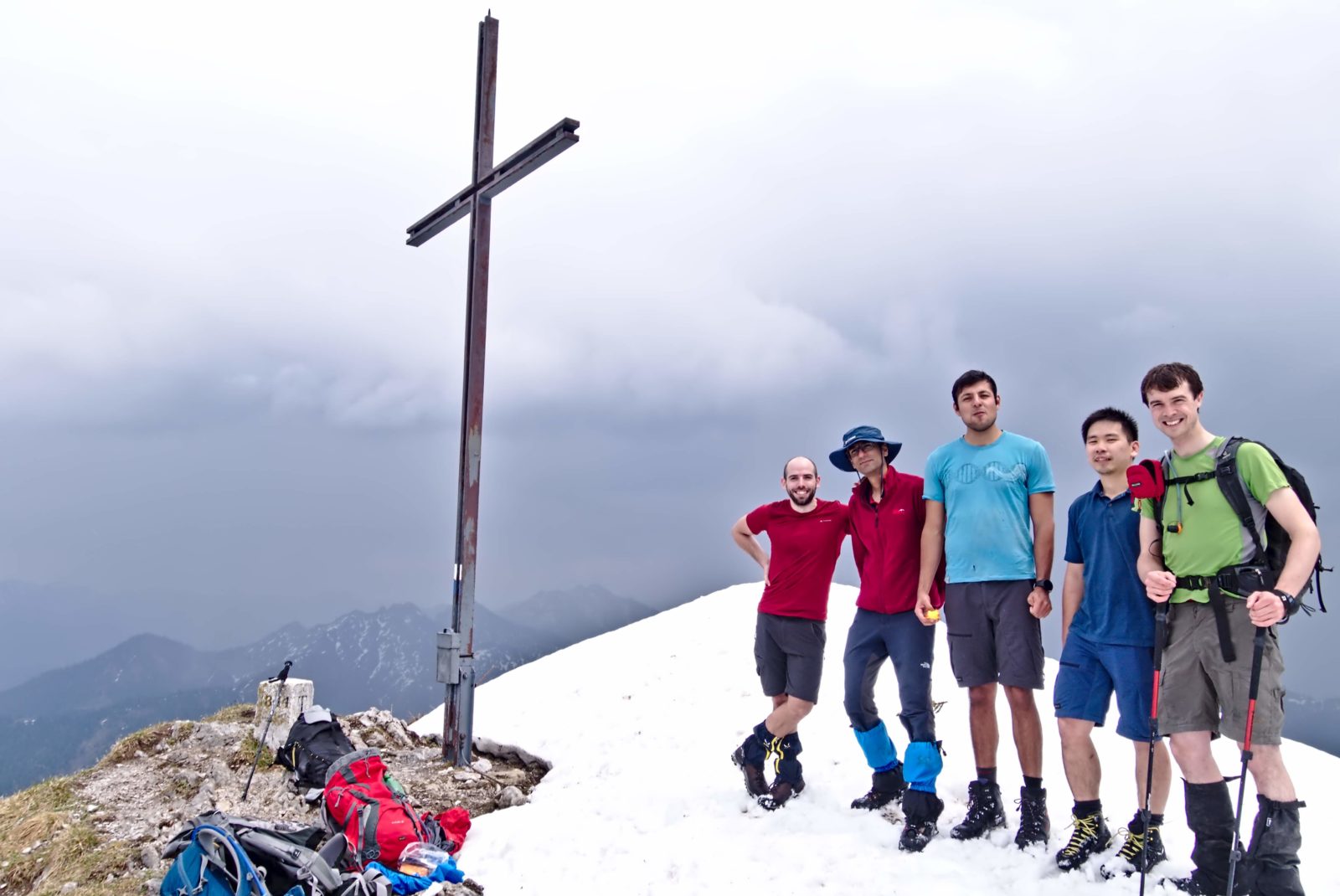 By special request from Afrizal, I recorded a spoken version of this report. 😉

What a lovely hike! We took the train south to Tegernsee, and then the bus with the creepy children’s voices announcing the stops on to Wildbad Kreuth. We were five in all: myself, Danial from Iran leading us, Erasmo from Mexico, Marco from Italy and Afrizal, a one named type of downhill running wombat.

The path started out well enough, a nice gravel track that followed the main river and then swung right following a smaller canyon. Not a bad way to gain altitude, but then we came to turn off. In our enthusiasm, we went too far along the stream, but rather than turn back we opted to push up through the dense wood. Several impressive scratches later, we broke out onto the ridge, with a glorious view of the Bavarian alps. It was here that Afrizal revealed he had brought roughly 3 kg of chocolate and haribo rather than any real food, and feeling rather sympathetic we helped him lighten his load.

Up, up and then right to our first bonus peak, Platteneck. Here we got our first view over Achensee and the impressive Austrian alps to the south. We could also see our next peak, Schildenspitze. I estimated a speedy ten minutes to get there, but despite some extremely enjoyable downhill snow running/sliding it took us 17 minutes. Having seen all this peak had to offer, we dropped back down and began to climb the main ridge. Danial lead us up some impressively steep sections before admitting he had no idea where the path was, so we had an enjoyable bash through the dwarf pine until we found it.

The ridge was still deep in snow, with a nice wind blown cornice to avoid. Despite this, it was warm, so shorts and gaiters were the order of the day. We looked around as the clouds drew in, rain drops whipped over the peaks to the south, sent scudding across the valley towards us and then swept up to form a fine horizontal shower. The light was glorious as the sun pierced the clouds, illuminating the peaks one at a time.

We passed over several minor peaks without really noticing them, and soon we began the short climb up to Halserspitz. At the top we could see heavy rain to the west, and so we paused only briefly for some more of Afrizal’s Haribo.

The way down was treacherous and difficult. The snow lay on steep slopes of around 45 degrees, and with the warm weather and heavy rain it was weak and slushy. Some brave soul had gone before us, and I went first of our group, kicking steps sideways into the slope. The run off was long and far below, and I concentrated instead on putting one foot in front of the other rather than looking down.

It was at the third such difficult traverse that I slipped. I had almost made it to an intermediate patch of rock in the middle of the snowfield, and the snow gave way beneath me. I began to fall, and all I could think was “Oh. Shit.” I formed my fingers into claws and struck at the rock, trying to find some purchase. I slid down the rock face for a metre of so before they finally, painfully caught and I stopped moving. I pulled myself back up and tried to calm down. The others were soon across, and we were free of the snow.

The final ridge down was uneventful and very pretty. Afrizal is insanely fast down hill and we saw him only when he chose to hold back. I had a good chat about via ferratas with Erasmo, and in no time were back at the bus.

An incredible hike with some great people, but the route down the north face of Halserspitz is not to be underestimated in winter.