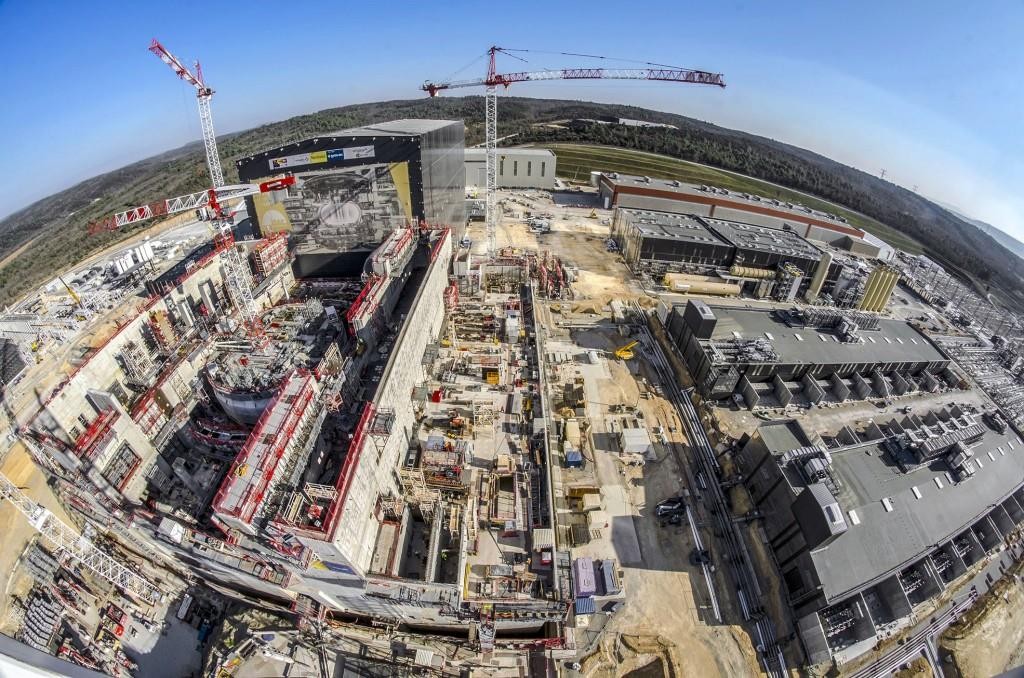 Above: The ITER construction site as of March 2019

After five and a half years working at Imperial College it was time for a change. I’d already applied for some positions in Paris the previous year, but was unsuccessful, and so I broadened the scope of my search and found a job at the Max-Planck Institute for Plasma Physics (IPP) near Munich in Germany.

Here I’m returning to work on tokamaks, the most successful fusion reactor concept that has so far been tested. I worked on a small tokamak called LTX when I was a graduate student at the Princeton Plasma Physics Laboratory
(PPPL), between 2011 and 2013. So when I came for interview at IPP I was able to talk in a vaguely convincing manner about divertors, neutral beams, electron cyclotron heating and poloidal field coils, even though it had been back before all my doctoral work on rather different plasmas in MAGPIE.

My last few months at Imperial College went by all too quickly. It was difficult to finish many (any?) of the projects I had going, so I focused on a couple of things – documenting all of the code and infrastructure I’d helped to build whilst I was there, and trying to ensure that the two M Sci students I was co-supervising would have enough data to write their final report. There was no time for more turbulence experiments, or to finish up some loose ends in the magnetic reconnection studies, though I did manage to submit a final paper on Thomson scattering studies of a plasma gun (this is a much less exciting devices than it sounds) for review.

At IPP I’ll be working in the ITER diagnostics group, focusing on bolometers and manometers. ITER is an experimental fusion reactor currently under construction in the south of France, built by an international consortium which represents half the world’s population. In fact, everything about ITER is big – the obvious joke here is that the timescales and budget are equally huge!

I don’t want to get into too many details here, partially because it’s all rather boring, and partially because you never know who’s reading, but it’s fair to say the construction of ITER has not always gone smoothly. Despite that, construction started in 2007 and is now half finished. The first plasma experiments are planned for 2025, and there is a real feeling of momentum, as well as tight deadlines, amongst those working on ITER.

The two diagnostics I mentioned – bolometers and manometers – are only a small fraction of the total work to be done on ITER, but they both play key roles. Bolometers measure the energy emmitted by the plasma in the form of light. Because the plasma is so hot, it glows like a red hot poker. But the plasma is so very hot it will emit most of the light as X-rays. When the plasma emits light, it cools, and the nuclear fusion rate drops. For a successful fusion reaction, the emitted light from the plasma must be minimised. A bolometer is a very simple device to measure how much light is emmitted by the plasma, and on ITER the plasma will be surrounded by over 500 of these bolometers.

The other device is a manometer, which is more commonly called a pressure gauge. It measures the pressure of the gas inside ITER. Although the core of ITER is a plasma, the colder material away from the core is made from neutral gas, and the gas pressure is key for controlling the stability of the nuclear fusion reaction.

Although both the bolometers and manometers are based on existing designs which have already been used in tokamaks, ITER presents a unique challenge – the environment is significantly harsher (higher neutron damage, stronger magnetic fields, higher heat loads) and the availability for access for repairs is greatly reduced compared to previous experiments. I’ll go into both of these diagnostics, along with the challenges of working on diagnostics for ITER, in more detail in future blog posts – for now I just wanted to give a short update so I could launch this new website!