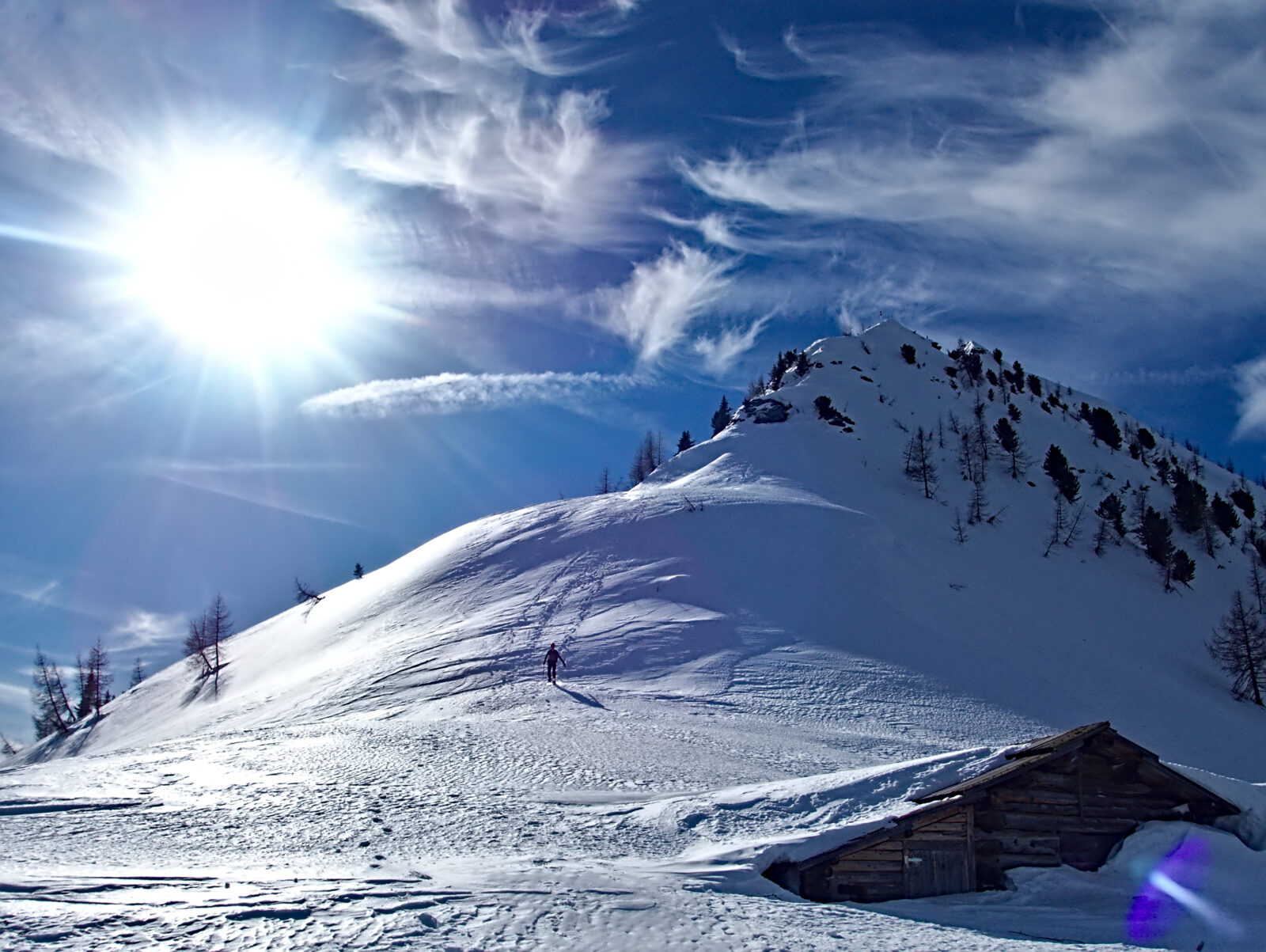 We had originally planned across country skiing (XC) holiday to Czechia, but there was a distinct lack of snow there. Instead, we switched our trip to Sud and Ost Tirol, an area which still had enough snow to keep open a reported 220 km of cross-country ski trails. A last minute booking of a couple of apartments in the small town of Kartitsch resulted in a long drive through traffic on Saturday before we collapsed exhausted into bed.

The next morning we woke to a glorious sight. Snow as far as the eye could see. Well, at least on the side of the valley the stayed in the shade! We collected our rental skis from Toblach, and went back to the house. Six out of the ten of us were complete novices, and we slid and fell around for a bit before deciding to find somewhere flatter. This was the Biathlon centre at Obertilliach, which also had an excellent cafe. After a few loops, people were feeling more confident, and we returned the next day to explore the trails a bit more.

On Tuesday, we headed to Gsiesertal, north of Toblach, to find some new trails. At around 1300 hm, the snow was poor, but it improve a lot as we climbed the valley to 1500 hm. We didn’t stay together, instead splitting into small groups who met for lunch or at cafes. Eventually we herded everyone together and headed back to Kartitsch.

Wednesday saw Andy go downhill skiing, Dad go XC skiing, Johanna and I go ski touring and the rest go sledging. Johanna and I set up through the forest on a rather pine cone strewn cruddy snow, climbing to Dorfberg. When we got above the tree line, the snow was excellent and we quickly made it to the first summit, Johanna leading the way with gentle zig zags that brought us effortlessly to the top.

We skied down the first peak, and skinned up the next, Pfannegg. I had new (very old) skis second hand, and although they were heavy on the ascent, they were nice for down hills, which is my biggest weakness. On the way across from Pfanegg to Golzentipp, we made a mistake and decided to traverse across wind blown powder overlying hard ice. Johanna did well, but I kept slipping down the slope, eventually ending up at the bottom, from where I skinned back up to her. We practised with ski crampons for the final ascent to the summit, before skiing down to join the downhill pistes and our friends for lunch.

At the bottom, the sledgers convinced us to take the cable car up and sledge down with them. This proved to be extremely fun.

The next day we drove to Sud Tirol, to tackle the famous Cortina d’Ampezzo to Toblach route, which runs along an old railway line for 30 km or so. This features train tunnels, bridges over deep gorges and a rather good cafe. Constrained by our cars, some of us turned round without completing the route, but Alex and DKP made it the entire way.

Our XC skills much improved, we returned the valley by our house and various groups attempted various segments of the Grenzlandloipe, the 30 km route along the valley. Alex and I started from the west and went east, and the others started from the east and went west. The snow quality was variable, but overall good and we did about 35 km.

Our final day, and we all packed up. Andy and I hatched a mad plan to go try out our ice axes, crampons and new skills from our course in Poland. We selected a likely looking ridge up to a peak near our apartment, and set off early in snow shoes up the forest tracks and ski trails through the woods. When we broke the tree line, the snow was deep powder and we were glad of the snow shoes as we climbed around to the north ridge of Oefenspitze. Here we switched to crampons and ice axe for the steep ascent. The snow was quite loose and powdery, which made some of the scrambles hard, and after a while we decided to turn round. We had learned a lot, and now we have a much better idea of how the map translates to reality!